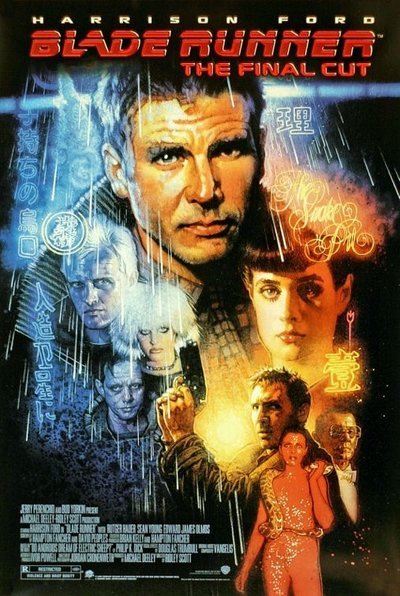 SYNOPSIS:
Los Angeles, year 2019. Cynical ex-cop Deckard (Harrison Ford) is a retired assassin of rogue androids (called “replicants”). His former boss, Bryant (M. Emmet Walsh), presses him into service: he is to kill a group of physically superior replicants that are on the loose after escaping from an “off-world” colony. Deckard visits the Tyrell Corporation, where he encounters mogul Eldon Tyrell (Joseph Turkel) and his assistant, Rachael (Sean Young). Tyrell informs Deckard that Rachael is a new breed of replicant–implanted with memories, she believes herself to be human. Bent on speaking to Tyrell in order to find out what their “termination dates” are, two of the replicants–Roy Batty (Rutger Hauer) and Pris (Daryl Hannah)–insinuate themselves into the home of geneticist J.F. Sebastian (William Sanderson), who created the replicant design for Tyrell. In the meantime, two more of the replicants have been disposed of and Deckard has become romantically obsessed with Rachael. END_OF_DOCUMENT_TOKEN_TO_BE_REPLACED

Quote:
Boy and Bicycle is the first film made by Ridley Scott. The black and white short was made on 16mm film while Scott was a photography student at the Royal College of Art in London in 1962.

Although a very early work – Scott would not direct his first feature for another 15 years – the film is significant in that it features a number of visual elements that would be become motiffs of Scotts work. The film features the cooling towers of the Imperial Chemical Industries works at Billingham, foreshadowing images in Alien, Blade Runner and Black Rain. The central element of the Boy and the Bicycle is re-used in Scott’s advert for Hovis of the early 1970s. The film features Scott’s younger brother Tony Scott as the boy. END_OF_DOCUMENT_TOKEN_TO_BE_REPLACED 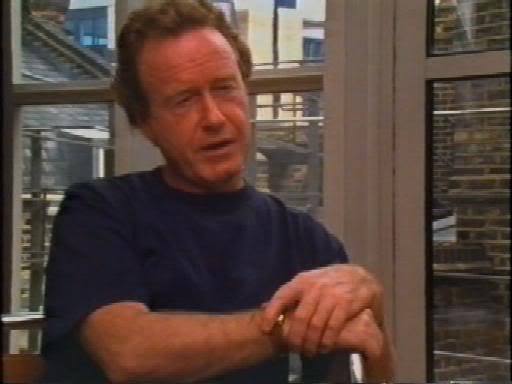 Documentary profile of film director Ridley Scott. The programme traces Scott’s career from West Hartlepool Art School to the Royal College of Art to the BBC, where he worked as a designer and later director on programmes such as SOFTLY SOFTLY and ADAM ADAMANT LIVES! (extract shown). He then moved into advertising, his most celebrated work being the Hovis advertisements – works of his shown include films for Bird’s Eye Fish Fingers “Stowaway” (1969), Hovis “Bike Ride” and Apple Computers “1984” (1983). His brother Tony Scott also talks about his work in commercials, and how he took over the direction of the Hovis adverts when Ridley moved into features. After such work and the BFI-produced BOY AND BICYCLE (1965) made with his brother Tony (extracts shown), he then moved into feature film direction: extracts shown from THE DUELLISTS (1977), ALIEN (1979), BLADE RUNNER (1982), SOMEONE TO WATCH OVER ME (1987), BLACK RAIN (1989), THELMA & LOUISE (1991) and his most recent film, shown in production, 1492: CONQUEST OF PARADISE (1992). Ridley Scott’s direction of the film LEGEND (1985) is not considered in the programme. Various interviewees comment on his working methods, his flashes of temper, and his mastery of screen visuals. The contributors to the programme include Susan Sarandon, Sigourney Weaver, Michael Douglas, David Puttnam, Gerard Depardieu, Iain Smith, Stephen Crowther (a teacher from West Hartlepool Art School), Tony Scott, ad executive Barry Day, Keith Carradine, sons Jake and Luke Scott, H.R. Giger, Mimi Rogers, Andy Garcia, Callie Khouri, Geena Davis and BBC set designer Jeffrey Kirkland. END_OF_DOCUMENT_TOKEN_TO_BE_REPLACED