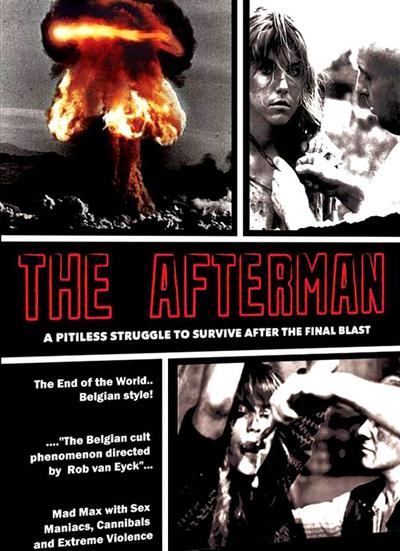 Quote:
What I have the honor of reviewing here is something totally unique and probably ranks quite high on the worldwide list of obscure Sci-Fi/horror movies. “The Afterman” is a Belgian post-apocalyptic thriller, but even in its own country of release (which is really small) it only received a minimal distribution and finding a decent copy on VHS is about as rare as encountering a salsa-dancing elephant. Fortunately – or unfortunately if you wish – there are not many people on the lookout for this film and that’s mainly either because they don’t know it exists or because the reputation of writer/director Rob Van Eyck isn’t exactly favorable around here. His most famous film “Blue Belgium”, inspired by the infamous Mark Dutroux pedophilia scandal, is generally considered as one of the worst Belgian movies ever and doesn’t really stimulate viewers to check out the director’s other works. Too bad, actually, since “The Afterman” is a truly special and deeply intriguing cinematic experiment, accomplished with an absolute minimum of financial means yet with a massive amount of controversial themes and downright shocking ideas in the screenplay. END_OF_DOCUMENT_TOKEN_TO_BE_REPLACED