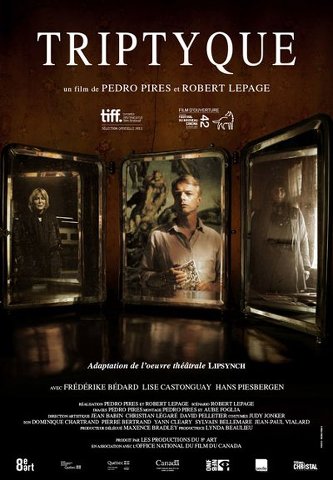 Triptych is a contemporary urban saga that tells the story of Michelle, a schizophrenic bookseller, her sister Marie, a singer and actress, and Thomas, a German neurologist and Maries future husband.

Against a backdrop of written and visual poetry, this film depicts three pivotal moments in the lives of these characters through the subjects of creation, mental equilibrium, social interaction, solitude, and emotional response, all the while maintaining the essence of the plays theme, which deals with the human voice. Its a study of the relationship humans have with speech and communication in all its complexity and variations. These three lives become the primary locus of personal identity and emotion, with their many manifestations, variations, and implications, through each characters inner development and burning desire for self-expression.

Triptych is a cinematographic adaptation of Lipsynch, directed by Robert Lepage.
END_OF_DOCUMENT_TOKEN_TO_BE_REPLACED