Quote:
English doctor Professor Gesellius is in China researching the effects of opium. He frees a young woman named Sin from a den of inequity run by Nung Chiang. When he sails for home with the girl, Chiang swears vengeance. In England, it emerges that Sin is the illegitimate daughter of one of Gesellius’ colleagues, whose son is having an affair with the doctor’s wife. The son is poisoned and Gesellius becomes a murder suspect. He flees to India with Sin, pursued by the vengeful Nung Chiang … END_OF_DOCUMENT_TOKEN_TO_BE_REPLACED 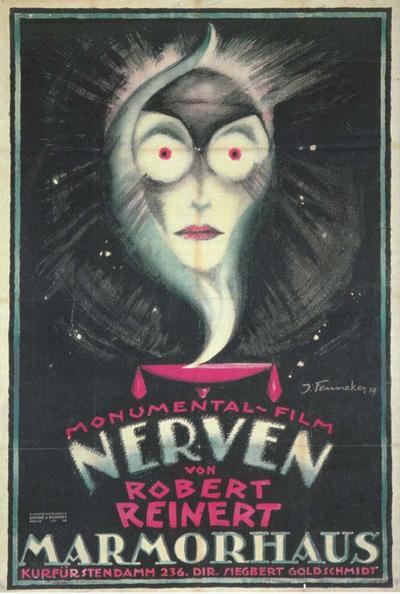 Quote:
In Nerven, writer-director-producer Robert Reinert tried to capture the “nervous epidemic” caused by war and misery which “drives people mad”. This unique portrait of the life in 1919 Germany, filmed on location in Munich, describes the cases of different people from all levels of society: Factory owner Roloff who looses his mind in view of catastrophies and social disturbances, teacher John who is the hero of the masses and Marja who turns into a radical revolutionary. Using different fragments the Munich Film Museum could reconstruct this forgotten German classic which is a historic document and anticipates already elements of the Expressionist cinema of the 1920s. END_OF_DOCUMENT_TOKEN_TO_BE_REPLACED