Charlotte is better known by its original French title, La Jeune Fille Assassinee. The film combines Roger Vadim’s overriding twin fascinations: eroticism and death. Charlotte (Sirpa Lane) dreams of dying violently while in the throes of an orgasm. This curious desire is the principal motivation for her entering into a life of crime. In addition to directing Charlotte, Vadim also produced, scripted, and played a major on-screen role. ~ Hal Erickson, All Movie Guide END_OF_DOCUMENT_TOKEN_TO_BE_REPLACED Synopsis:
Charles is wealthy, a French venture capitalist in the 1830s; he’s also an aristocratic assassin, prompting duels for political, monetary, and sexual gain. At his aunt’s, he meets Madame Mathilde LeRoi, a virtuous and beautiful woman, and he determines to seduce her. Along the way, his lust and game playing give way to love. One of his partners in crime and seduction, a decadent marquise, determines to break Mathilde’s spell over Charles, sending her a forged letter that begins a spiral of tragedy. END_OF_DOCUMENT_TOKEN_TO_BE_REPLACED 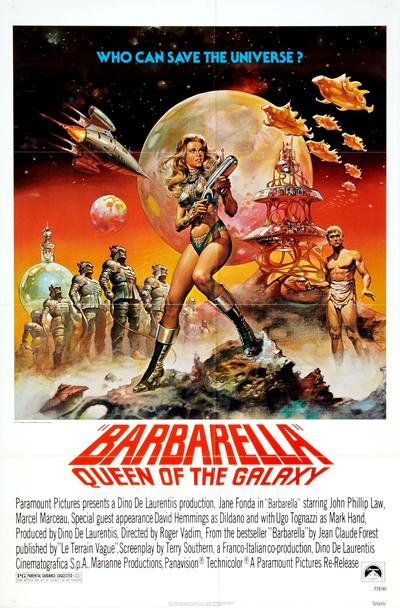 In this notorious film version of the popular French comic strip by Jean-Claude Forest, Jane Fonda plays a sexy yet innocent space-age heroine in the year 40,000 A.D. who never gets herself into a situation that requires too much clothing. BARBARELLA opens with the titular heroine stripping down to nothing in zero gravity among strategically placed credits. From there Barbarella embarks on a mission to find a peace-threatening young scientist named Duran Duran (Milo O’Shea) by order of the president of Earth. En route, she’s attacked by killer dolls, is strapped into a contraption known as the Excessive Machine, and falls in love with a blind angel. END_OF_DOCUMENT_TOKEN_TO_BE_REPLACED