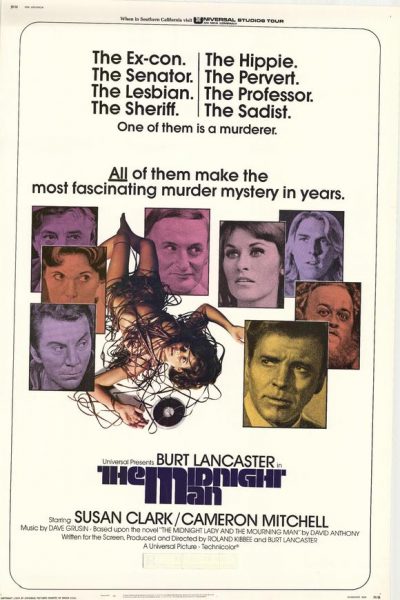 The Midnight Man is one of the eerier and more startling mystery films of its period, sustaining for nearly two hours a mood that veers very carefully between seductive, quiet lyricism and lurking violence and despair. It was something of a tour de force for Burt Lancaster, who not only starred in it, but also co-directed the movie (with Roland Kibbee, who did most of the directing) and co-authored the screenplay, also with Kibbee. The plot is one of the more violent and complex in a mystery of this era, hinged around a series of seemingly unrelated events, starting with a robbery that turns more vicious than it needs to for no good reason, and leading to a series of shootings, bludgeonings, and other mayhem that leaves a bloody stain across its small border-state college-town setting. END_OF_DOCUMENT_TOKEN_TO_BE_REPLACED