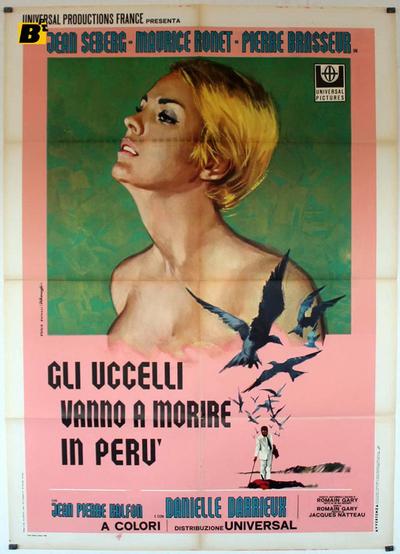 SPOILER
From American Film Institute Catalog 1961-1970: “In the early morning hours after a Peruvian carnival, a young woman named Adriana lies naked and exhausted on a lonely stretch of beach, the final resting place for dying gulls from the nearby Guano Islands. The night before, Adriana left her sadomasochistic millionaire husband and came to the beach with four costumed revelers with whom she hoped to find sexual fulfillment. Tormented by nymphomania, and knowing that her husband and his chauffeur-bodyguard will soon come for her, Adriana dresses herself and wanders into a beachside brothel owned by Madame Fernande. At first Adriana gives herself to the madame and offers to work for her as a prostitute but then changes her mind and returns to the beach. Remembering her agreement that the chauffeur could kill her if she ever succumbed again to her sickness, she attempts to drown herself, but she is rescued by Rainier, a poet and self-confessed failure, who runs a beach cafe that no one frequents. While they make love, Rainier implies that they could be each other’s salvation. His suggestions are interrupted, however, by the arrival of the chauffeur and the whisky-sodden husband, who have come to carry out the agreed-upon ritualized execution. Rainier intervenes and is knocked unconscious; a young Indian boy called Alejo, who has been following Adriana, leaps out from a hiding place and plunges a knife into the chauffeur. Ignoring the others, Adriana wanders off alone as her husband picks up the dead chauffeur’s cap and hands it to Rainier, who accepts it. As the two men set off after Adriana, the young boy races headlong into the sea”SPOILER END_OF_DOCUMENT_TOKEN_TO_BE_REPLACED