Gustave Courbet, The Origin of his World
Gustave Courbet (1819-1877), painter of real life, the earth, and material things, was so much a part of his era he lost himself in it. He paid for this dearly: wealthy and famous in this youth, he was later obliged to chum out paintings to avoid starvation.
“Only an hour long, Romain Goupil’s 2007 documentary on Gustave Courbet, the great French 19th-century realist painter, still expands your mind and heightens your reactions, with the lucidity and grace of all the best art (and criticism). Courbet was a terrific character, a rebel from the bourgeoisie, who accomplished in paint the revolution that he couldn’t quite manage in life. A lifelong anti-clericist and socialist, he was an important figure in the Paris Commune, a political indiscretion for which he later paid dearly, with exile and bankruptcy. END_OF_DOCUMENT_TOKEN_TO_BE_REPLACED

Quote:
This intelligent and current picture about childhood fears and understandings also serves as a damning indictment of French immigration policy under Sarkozy. Narrated retrospectively from the year 2067 by central protagonist Milana, she tells the story of her near-deportation from France at the age of ten and the plan her young classmates hatched to save her. Milana (Linda Doudaeva) lives with her Chechen family in Paris and attends the same school as her friend Blaise (Jules Ritmanic) and his younger sister Alice (Louna Klanit). After their friend Youssef is deported along with his family, Blaise’s mother (Valeria Bruni-Tedeschi) takes Milana into their home, hoping to protect her from the police, busy chasing deportation targets. END_OF_DOCUMENT_TOKEN_TO_BE_REPLACED

She was 18, they were in love, lived together 10 years. 20 years letter she
sends him a letter. She’s sick, does not talk much about her, but asks him
a question “When will you make a good movie ?”. He then takes his camera and
tries to speak of other things, about cinéma, their early political combats
and what became of them. Through his hesitations, his interrogations, he
draws the bitter image of an era. Moscow, Gaza, Berlin, Belgrade, Sarajevo,
Paris, Sarajavo again. A way to stay with her, to retail life. END_OF_DOCUMENT_TOKEN_TO_BE_REPLACED 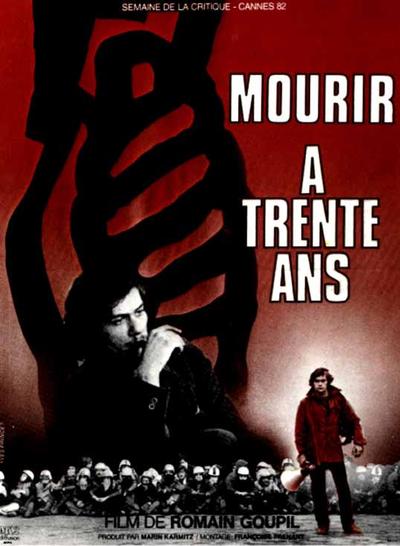 This film won the Golden Palm at the 1982 Cannes Film Festival.
It often gets referenced as one of the greatest films about “1968”. END_OF_DOCUMENT_TOKEN_TO_BE_REPLACED