Review Summary
After literally inventing the movie musical with The Jazz Singer, Warner Bros. purchased the motion picture rights to the evergreen Sigmund Romberg/Oscar Hammerstein II 2nd operetta The Desert Song. Although the results looked like a photographed stage play (a common failing of early-talkie songfests), the unforgettable Romberg-Hammerstein tunes ({&The Riff Song}, {&One Alone}, the title number) more than carried the day. John Boles stars as The Red Shadow, the Robin Hood-like leader of the Riffs and the bane of the existence of General Bierbieu (Edward Martindel). The good General has another cross to bear in the form of his nerdish, lily-livered son Pierre, who is likewise despised by heroine Margot (Carlotta King). END_OF_DOCUMENT_TOKEN_TO_BE_REPLACED

Synopsis
Debra Paget commits a murder for which Terry Moore (as club singer Lois King) is arrested, tried, and condemned to die. The story line wanders through the trial and Miss King’s final hours on Death Row. The true killer is finally ready to confess, but already Miss King (who has by now been strapped into the electric chair) is at risk. Will she be rescued in the nick of time? END_OF_DOCUMENT_TOKEN_TO_BE_REPLACED

Amidst a backdrop of growing violence and intimidation, independent cab drivers struggling against a consolidated juggernaut rally around hot-tempered Matt Nolan. Nolan is determined to keep competition alive on the streets, even if it means losing the woman he loves. END_OF_DOCUMENT_TOKEN_TO_BE_REPLACED

Synopsis:
Nick Cherney, in prison for embezzling from Torno Freight Co., sees a chance to get back at Johnny Torno through his young priest brother Jess. He pays fellow prisoner Rocky, who gets out a week before Nick, to murder Jess…who, dying, tells revenge-minded Johnny that he’d written a clue “in the Bible.” Frustrated, Johnny obsessively searches for the missing Gideon Bible from Jess’s hotel room. Meanwhile, Nick himself gets out with murder still in his heart. But another factor is in play that none of them (except the murdered Jess) had planned on. END_OF_DOCUMENT_TOKEN_TO_BE_REPLACED

Synopsis:
Who’s that dodging his murderous mama, an equally murderous sheik, and the temptations of a harem full of beauties? It’s Brooklyn’s own Eddie Wilson, who comes to Egypt to claim an inheritance and finds that lots of other folks want a slice of his $77,000,000 pie. In one of his famed Samuel Goldwyn movie extravaganzas, Eddie Cantor sings, clowns and wows ‘em as Eddie. END_OF_DOCUMENT_TOKEN_TO_BE_REPLACED Synopsis:
Sam Spade is quite the womanizer. When his secretary tells him the new customer waiting outside his office is a knockout, he wastes no time before seeing her. It turns out she’s a knockout with money. And she wants to spend it on his services as a private detective. She has some story about wanting to protect her sister. Neither he nor his partner, Miles Archer, believes it. But with the money she’s paying, who cares? The job proves to be more dangerous than either of them expected. It involves not just the lovely dame with the dangerous lies, but also the sweaty Casper Gutman, the fey Joel Cairo, and the thuggish young Wilmer Cook. Three crooks, and all of them are looking for the statuette of a black bird they call the Maltese Falcon. END_OF_DOCUMENT_TOKEN_TO_BE_REPLACED 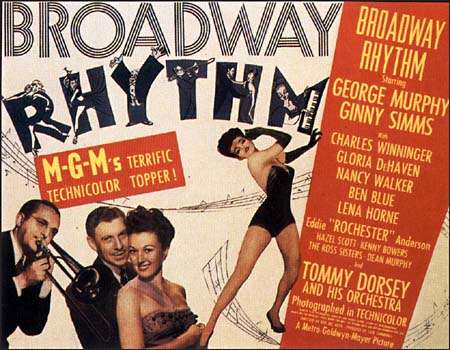 Broadway producer Jonnie Demming is ready to out-razzle and out-dazzle ’em all with a new production that has everything – except the actress Jonnie knows is perfect for the lead. Future U.S. Senator George Murphy portrays Demming in a backstager drawn from the Jerome Kern-Oscar Hammerstein II musical Very Warm for May and co-starring Ginny Simms as the actress in Demming’s sights. But the film’s real story lies in its supporting acts: Tommy Dorsey leads the Big Band brass, Lena Horne sings an exotic Brazilian Boogie, Hazel Scott scorches the 88, the contortionist Ross Sisters defy human anatomy and Nancy Walker and Ben Blue add their clowning glory. Lots of romp and rhythm mark marvelous time in Broadway Rhythm! From Warner Brothers! END_OF_DOCUMENT_TOKEN_TO_BE_REPLACED