One blast of an exploitation-noir (to coin a phrase) Wild Weed (aka She Shoulda Said No) was marketed by the legendary huckster Kroger Babb, and directed by the always reliable Sam Newfield (who could handle anything from noir to horror to all-midget musicals). Babb, who was legendary for his marketing and publicity techniques (he had some of the most incredible return-on-investment ratios of his time, among film producers), wasn’t averse to starting letter writing campaigns against his own pictures to drum up controversy and thus sell tickets. END_OF_DOCUMENT_TOKEN_TO_BE_REPLACED

Kelly Jordan (Robert Lowery) and Andy Melton (Robert Kent) are former AAF fliers operating a cargo service over the South American mountain ranges in order to get enough money to return to Texas and buy a commercial line. Andy is killed when his overloaded plane crashes and explodes. Kelly meets Laurey Roberts (Ann Savage), who gets him to take her to the mining-camp operation as a cook, as she is running away from her ex-husband, Tom Hammond (Douglas Fowley), who has just been released from prison. END_OF_DOCUMENT_TOKEN_TO_BE_REPLACED

U.S. Foreign Service officer matches wits with a Chinese warlord to try to save American citizens threatened with execution. END_OF_DOCUMENT_TOKEN_TO_BE_REPLACED

In post-WWII America,Radar has been developed to such an extent that law enforcement agencies, seated in their headquarters, can twist a few dials and bring in, on a small television screen, a crisp picture of a roving stock-footage truck carrying uranium material, highly coveted by foreign powers in order to make atomic bombs and blow up the U.S.A. This advanced version of Radar can follow the car occupied by the crooks out to hijack the truck, and also the police car pursuing them after they hijack the truck. But, alas, this can only be done when the atomic material is in motion, and has little value when the crooks park the truck. So the lawmen have to send in a female mole posing as a moll.
(from IMDB) END_OF_DOCUMENT_TOKEN_TO_BE_REPLACED

Definite Grade B. The last in the Forgotten Noir Volume 6 series. For desperate viewers.

Quote:
The killing of Mayor Palmer (Forrest Taylor) is being placed on Paul Moody (Richard Emory) by fingerprint expert Jim Stover (Richard Travis) as Moody’s prints were found on the murder weapon. When reporter Brad Evans (Rory Mallison) places doubt in Stover’s mind that the fingerprints were Moodys, he decides to investigate further with the help of the mayor’s daughter Carolyn (Sheila Ryan). END_OF_DOCUMENT_TOKEN_TO_BE_REPLACED

IMDB:
When a reporter helps his girlfriend murder her rich husband, an innocent man gets the blame and faces execution. END_OF_DOCUMENT_TOKEN_TO_BE_REPLACED 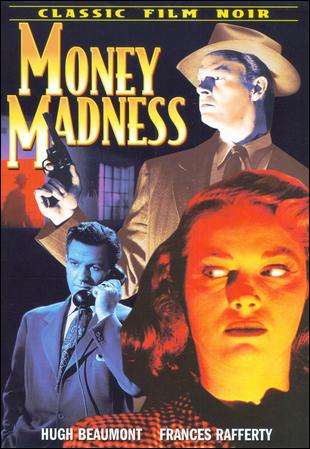 In this lean and efficient programmer from the middle of the cycle, Beaumont impresses as moody crook-on-the-lam Steve Clark (an alias). Desperate to construct a front that will deceive the authorities and disgruntled fellow thugs alike – he blows into a strange town and rapidly spins the tangled web he deems necessary.
END_OF_DOCUMENT_TOKEN_TO_BE_REPLACED