Ivar Johansson – Rågens rike AKA The Kingdom of Rye (1929)

Rågens rike is a Romeo and Juliet-esque romantic drama, set in the rural landscapes of Helsingland in northern Sweden. It is the debut feature of Ivar Johansson, who was inspired by the Soviet montage cinema when he made it. In 2007 it was selected by Ingmar Bergman as one of his all-time favorite Swedish movies. END_OF_DOCUMENT_TOKEN_TO_BE_REPLACED

The musician Wolo is in love with the beautiful peasant girl Anjuta. She is forced, by her stepmother who runs a speakeasy, to dance for the drunken guests of the tavern. Restored by The Swedish Film Institute in 2016.

Quote:
A first preservation of Mauritz Stiller’s Balettprimadonnan was carried out in 1994, from a fragment of a tinted and toned nitrate print with Spanish intertitles found in Zaragoza, Spain. In 2015, the Filmoteca Espanola in Madrid identified a second fragment with Spanish intertitles of the film in its collections, originating from the same nitrate print, meaning that approximately half of the film has survived. END_OF_DOCUMENT_TOKEN_TO_BE_REPLACED

Yay! Another Danish silent melodrama. Actually, this is a particularly superior example. The Danish Film Institute’s website, from which this copy comes, descrbes it thusly:

Quote:
A wealthy young man, Edgar, sees a shopgirl, Ellen, and is immediately attracted to her. He buys her flowers. They meet next Sunday and, presumably, often thereafter. Three months later Ellen is pregnant. The couple decide to marry, and Edgar tells his mother. His father convinces him not to marry Ellen and sends him away to visit friends in the country. The daughter of the family he visits, Lily, gets him to write to Ellen when she finds out about her. Edgar’s fahter, however, has convinced Ellen’s former employer, to whom the letters have been sent, to turn them over to him. When Edgar gets no reply from Ellen, he secretly returns to the city. END_OF_DOCUMENT_TOKEN_TO_BE_REPLACED

Quote:
Although only Dreyer’s third film, The Parson’s Widow is an astonishingly mature achievement. Many of the director’s chief characteristics can be recognised, appearing not as blueprints but in their already fully-realised form. To people who only know his more celebrated later works, the most surprising feature of The Parson’s Widow is its humour. Its comedy is in the tradition – as becomes a Swedish production of the time – not only of Mauritz Stiller’s well-known frequentation of the genre, but also of some of Victor Sjöström’s less widely seen or underappreciated masterpieces, such as Hans nåds testamente (His Honor’s Testament, 1919) and Mästerman (1920). All of these films are quiet, poignant comedies of love and ageing, strangely foreshadowing some of Leo McCarey’s 1930s films. END_OF_DOCUMENT_TOKEN_TO_BE_REPLACED 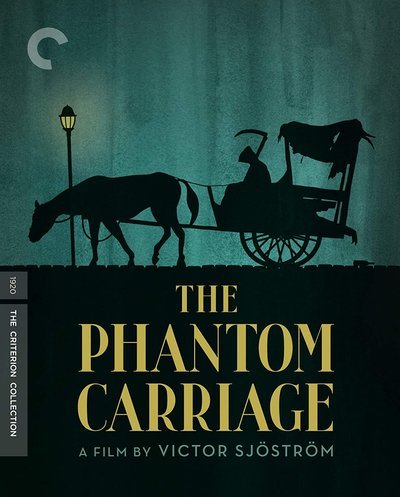 The last person to die on New Year’s Eve before the clock strikes twelve is doomed to take the reins of Death’s chariot and work tirelessly collecting fresh souls for the next year. So says the legend that drives The Phantom Carriage (Körkarlen), directed by the father of Swedish cinema, Victor Sjöström (The Wind), about an alcoholic, abusive ne’er-do-well (Sjöström himself) who is shown the error of his ways and the pure-of-heart Salvation Army sister who believes in his redemption. Based on a novel by Nobel Prize winner Selma Lagerlöf, this extraordinarily rich and innovative silent classic (which inspired Ingmar Bergman to make movies) is a Dickensian ghost story and a deeply moving morality tale, as well as a showcase for groundbreaking special effects. END_OF_DOCUMENT_TOKEN_TO_BE_REPLACED

Benjamin Christensen – Häxan AKA Häxan Witchcraft Through the Ages (1922)

Quote:
Fictionalized documentary showing the evolution of witchcraft, from its pagan roots to its confusion with hysteria in modern Europe. Grave robbing, torture, possessed nuns, and a satanic Sabbath: Benjamin Christensen’s legendary silent film uses a series of dramatic vignettes to explore the scientific hypothesis that the witches of the Middle Ages and early modern era suffered from the same ills as psychiatric patients diagnosed with hysteria in the film’s own time. Far from a dry dissertation on the topic, the film itself is a witches’ brew of the scary, the gross, and the darkly humorous. Christensen’s mix-and-match approach to genre anticipates gothic horror, documentary re-creation, and the essay film, making for an experience unlike anything else in the history of cinema. END_OF_DOCUMENT_TOKEN_TO_BE_REPLACED

There is very little information available online on this little gem, the first ‘feature-length’ film shot exclusively in Iceland by an Icelandic director, the pioneer Loftur Guðmundsson. Director and crew travelled all around the country with the ambitious goal of documenting all the aspects of the local life at the time. Fishing plays an important role (being then, by far, the number one national industry); one can also witness the humble beginnings of ‘city-life’ in the capital, one of the first (or was it the very first?) cars driving in Iceland, beautiful pastoral shots of farm-lands, ladies posing in the national costume, as well as fighters indulging in the national sport, ‘glyma’. The 21st century traveller will be able to recognize a number of landmarks. The images are often naive, genuine, and captivating. In my opinion one of the most valuable Icelandic films. –Ewolve END_OF_DOCUMENT_TOKEN_TO_BE_REPLACED