The touching portrait of eight-year-old Sasha, who questions her gender and in doing so, evokes the sometimes disturbing reactions of a society that is still invested in a biological boy-girl system of thought. END_OF_DOCUMENT_TOKEN_TO_BE_REPLACED

Eighteen-year-old Rémi goes to a casting where the director appears to be drawn to his acting as much as his physique. Confused by his first experience, Rémi wanders around Paris in search of himself.

Quote:
Open Bodies is an unusually sensitive portrait of late adolescence with its half-formed desires and the tug of war between sexual curiosity and reticence. – Stephen Holden in The New York Times. END_OF_DOCUMENT_TOKEN_TO_BE_REPLACED 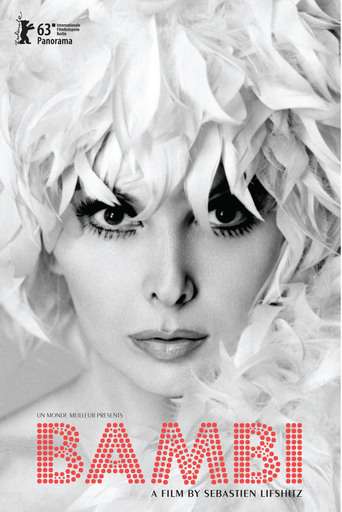 gaze.ie wrote:
Bambi is the story of Marie-Pierre Pruvot, born Jean-Pierre in a small village in the former French colony of Algeria. She struggled in her early life as a boy but found a way out of her colonial life when a Parisian cabaret show came to town. Encouraged and enchanted, she moved to Paris, assumed the stage name of ‘Bambi’ and began her life as a female cabaret star.

Having overcome a difficult childhood and a tough gender transition, when surgery and hormonal treatments were still in their infancies, ‘Bambi’ is now a radiant woman in her late seventies and one of the most charismatic and engaging people you will ever seen on screen.