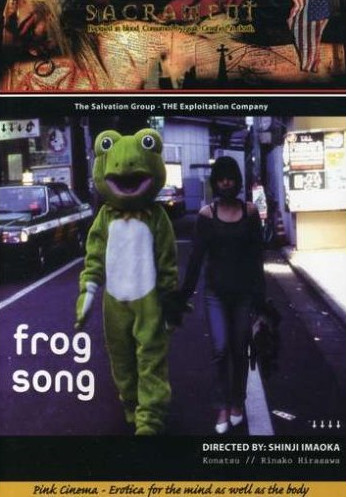 Quote:
Frog Song is a truly innovative example of Pink cinema; a new and exciting movement within Japanese underground filmmaking that mixes erotic content with art film aesthetics to create an unmistakably unique and modern mode of filmmaking. A bizarre film, Frog Song follows Akemi, a young woman who runs off into the night after discovering that her husband has been cheating on her. She ends up in a local comic shop where she meets an aspiring comic-book artist, Kyoko, who supports herself by working as a prostitute. Unable to deal with her husband s betrayal, Akemi moves in with Kyoko where they develop a taste for sex, singing and frogs! With its insane narrative that somehow manages to incorporate frogs into an otherwise realistic story of love and friendship, Frog Song is a wonderful example of Pink Cinema from the director of Despite All That, the best selling title on the Sacrament label in Europe. END_OF_DOCUMENT_TOKEN_TO_BE_REPLACED From Germany’s Rapid Eye Movies and Japan’s Kokuei Company comes a whimsical pink film musical about a woman and a sea creature.

Directed by pink-film veteran Shinji IMAOKA (Lunch Box, Frog Song), shot by Christopher Doyle – the famed cinematographer behind Hero and countless films by Wong Kar Wai – and with music by Germany’s Stereo Total, Underwater Love – A Pink Musical promises to be unlike anything you’ve ever seen.

Asuka works in a lakeside fish factory. She is just about to be married to her boss. One day, she encounters a Kappa, a water creature living in the lake and learns that it is the reincarnation of Aoki, her first love.
What ensues is a zany spectacle of love, music and sex. END_OF_DOCUMENT_TOKEN_TO_BE_REPLACED