In the dungeon of an old mansion, scheming Seema and her bumbling brother, Vikram, plot to murder Sunil, the lowborn boyfriend of Seema’s niece, Anita. But these evildoings are nothing compared to the monstrous spirits lurking in the building. END_OF_DOCUMENT_TOKEN_TO_BE_REPLACED

Purana Mandir tells of the ancient curse visited on an Indian king 200 years ago – all female members of his family will turn into hideous monsters and die in childbirth. The daughter of one of his descendants tries to put an end to the curse and travels to the ancient temple where it all began 200 years ago. What awaits her and her friends there is terror beyond their wildest nightmares. END_OF_DOCUMENT_TOKEN_TO_BE_REPLACED

A nightmare creature haunts a young girls dreams. Her friends refuse to believe her when she tells them that the fiend has entered the real world and they are all to die a horrible death. Soon her fears start to come true. END_OF_DOCUMENT_TOKEN_TO_BE_REPLACED

Shyam Ramsay & Tulsi Ramsay – Veerana AKA Vengeance of the Vampire (1988)

After the sudden death of her dad, Sameer, and mom, Preeti, Sahila goes to live with her grandmother and cousin in Bombay. Years later, now fully matured, she returns home to Chandanagar to live with her uncle, Mahendra Pratap, and cousin, Jasmin. This is where she will be exposed to a resurrected evil witch, Nikita, who has manifested herself in the body of Jasmin. Aided by a priest named Baba, she is determined to kill each and everyone of the remainder of the Pratap family members. And there is no known power on Earth that can stop Nikita. END_OF_DOCUMENT_TOKEN_TO_BE_REPLACED 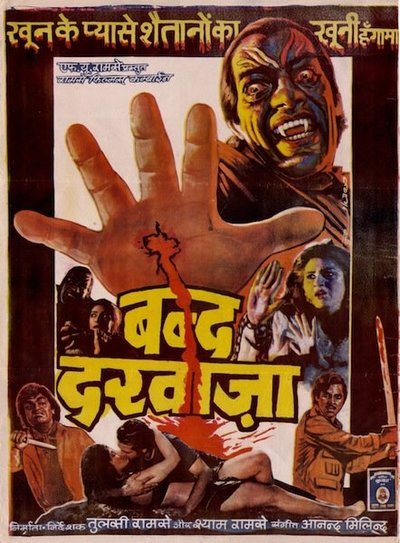 Bandh Darwaza is the Indian version of Dracula. A childless woman visits the lair of an evil magician in order that she may conceive. When she gives birth to a baby girl the magician demands that she hand her over. She refuses and has the magician killed. Years later he is revived as a fully fledged member of the undead. He comes looking for the now teenage girl intending to make her his slave. END_OF_DOCUMENT_TOKEN_TO_BE_REPLACED