Plot Synopsis from allmovie.com by Mark Deming
Based on a successful stage drama, this historical romance stars Norma Shearer as Elizabeth Barrett, an invalid largely confined to her bed. Elizabeth has little company beyond her dog and her obsessively protective father, Edward Moulton Barrett (Charles Laughton). Her one great passion and means of emotional escape is writing poetry, to which she devotes a large part of her days. She makes the acquaintance of fellow poet Robert Browning (Fredric March), who pays her a visit. They respect each others’ literary abilities and become romantically attracted to each other. Robert asks for Elizabeth’s hand in marriage, but Edward refuses to allow it. Elizabeth must battle her father for the right to live her own life, but eventually she is able to wed Robert and bring herself back to health. Director Sidney A. Franklin also helmed a remake of The Barretts of Wimpole Street (1957); it was his last film. END_OF_DOCUMENT_TOKEN_TO_BE_REPLACED 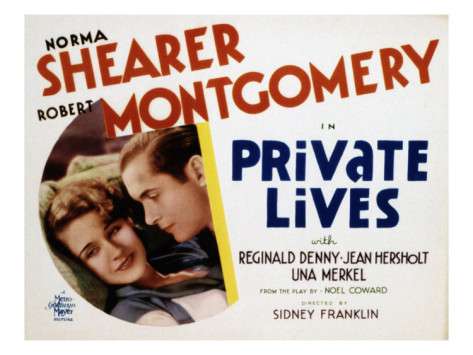 Plot: Elyot and Sibyl are being married in a big church ceremony. Amanda and Victor are being married by a French Justice of the Peace. Both couples go to a hotel on the same day and are put in adjoining rooms with adjoining terraces. Things go fine until Amanda sees her former husband Elyot on the adjacent terrace. While they both pretend to be happy, both make plans to leave, but their spouses do not want to leave as it is their respective honeymoons. So the other spouses each go down to the bar. This leaves Elyot and Amanda together and they reminisce. Before long, the sparks again fly and they both decide to leave together to the Mountains of Switzerland. They love, they bicker, they fight, they stop. Then it begins over and over. Then Victor and Sibyl show up at their chalet. Written by Tony Fontana END_OF_DOCUMENT_TOKEN_TO_BE_REPLACED