Synopsis:
Built around the publicity “feud” between newspaper-radio-gossip spreader Walter Winchell and band leader Ben Bernie, a radio star, Alice Huntley (Alice Faye), who does an advice-and-inspiration program, helps a mike-shy singer, Eddie Kane (Jack Haley) to success by tricking him into singing with Bernie’s orchestra. Winchell uses it to expose Bernie as the trickster. But Kane becomes a great hit with the radio public, and falls in love with Alice. And Bernie and Winchell shake hands to show there’s no business like show business and fabricated feuds. END_OF_DOCUMENT_TOKEN_TO_BE_REPLACED

Richard Clarke (Benny), a small town lawyer, is not making enough money to marry Janie Brown (Lane), his fiancée. To improve himself, Richard moves to New York City. Although he does not have any clients, Richard tells Janie that he is doing well. She expects to move to New York and marry him.

His assistant Shufro (Anderson) suggests that he could make some money if he became hard and ruthless. The ultimate test of his meanness is ‘stealing candy from a baby’. He is photographed as he pulls a sucker away from a small boy. The picture is printed in the paper under the caption, “Meanest Man in the World.” He is hired to evict an old woman, Mrs. Frances H. Leggitt (Margaret Seddon), from her apartment and more pictures appear in the paper. END_OF_DOCUMENT_TOKEN_TO_BE_REPLACED

Damon Runyon’s Broadway fable The Lemon Drop Kid was filmed twice by Paramount Pictures, but only the 1934 version with Lee Tracy paid more than lip service to the original Runyon story. The second version, filmed in 1951, was completely retooled to accommodate the talents of Bob Hope. Known far and wide as the Lemon Drop Kid because of his fondness for that particular round, yellow confection, Hope is a bookie who finds himself deeply in debt to Florida gangster Fred Clark. Magnanimously, Clark permits Hope to head to New York to raise the money–but he’d better have the dough ready by Christmas, or else. END_OF_DOCUMENT_TOKEN_TO_BE_REPLACED

In a far off country, their king is critically wounded after an assassination attempt and the only heir is a timid New York radio personality, Bob Hope. After reluctantly traveling to his father’s homeland, Bob is not happy with becoming the target of the same terrorist organization that attacked the king. END_OF_DOCUMENT_TOKEN_TO_BE_REPLACED 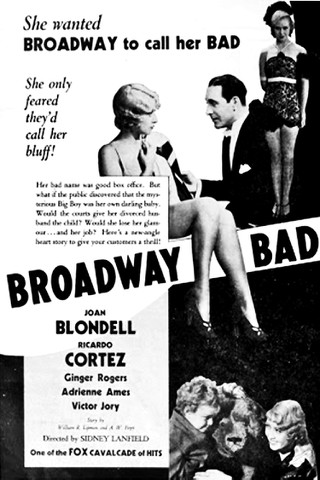 In varying degrees of undress, the chorus girls of the “Frolics of 1929” gossip that the show’s rich backer, brokerage head Craig Cutting, has “given the gate” to his mistress Aileen, one of the dancers, in preference to Antoinette “Tony” Landers, a dancer described as “a nice kid from a nice home.” As the girls chat, Tony is being seduced by her boyfriend, Bob North, the scion of a wealthy family, in the empty stadium at Yale, where he goes to college. Sometime later, as Tony prepares to go to her social debut at Craig’s party, Aileen confuses and upsets her with taunts about Craig’s “dividend checks” and “technique.” At the party, Tony learns that the dividend checks Craig has been giving her have not come, as she supposed, from the bonds her mother left her, but instead directly from Craig. She rebukes him for putting her in a position of obligation to him and refuses to succumb to his “technique” after he denies that he expects anything in return. Just then, Bob, whose suspicions have been fueled by Aileen, arrives and, after revealing that Tony is his wife, slaps her face with the cancelled checks, calls her a “dirty little tramp” and leaves. Tony confesses to Craig that she kept the marriage secret so that Bob would not be kicked out of college. When she asks Craig to help straighten out the situation, he refuses to interfere.
END_OF_DOCUMENT_TOKEN_TO_BE_REPLACED