Since the IRS has ordered new taxes, all traders in the village are tormented. Only Torquato Pezzella, a wealthy merchant of rain does not give in to despair general. To escape the contributions it has offered a tax advisor, the very respectable Curto Hector, who is in reality an ignorant on the subject. Still, Pezzella that has so far managed to avoid the taxes through the valuable advice of his new partner. Until one day an inspector of the brigade versatile, the formidable Topponi Fabio decides to check himself the accounting of this individual who is enriched by eye and does not report to the state. The note is difficult to digest; home Pezzella owes more than fifteen million in contributions. However, an unexpected event will upset all the data … END_OF_DOCUMENT_TOKEN_TO_BE_REPLACED

Mr. Pezzella (Toto) owns and operates a luxury clothing store very well established. By its nature, but does not like and does not consider it right to pay taxes and therefore uses a tax consultant (Louis de Funès) to be able to evade more calmly. Unfortunately for the cavalier Pezzella the Guardia di Finanza decides to send an inspection, in the person of Marshal Topponi (Aldo Fabrizi) and Brigadier Bardi. They start attempts Pezzella (guided by the advice of dishonest and ineffective tax advisor) to get into dell’inossidabile marshal to try to bribe him, and sometimes openly declaring with excessive dose of servility. END_OF_DOCUMENT_TOKEN_TO_BE_REPLACED

An industrialist has his wife tailed because he secretly hopes she is betraying him so that he can ask for a divorce and marry the model he’s fallen in love with. This leads to a series of thefts, blackmail and a suicide as well. END_OF_DOCUMENT_TOKEN_TO_BE_REPLACED

Synopsis:
Tragicomedy telling of the trials and tribulations of a troupe of variety show artists. END_OF_DOCUMENT_TOKEN_TO_BE_REPLACED

This film is also known as “The Girl Game” and “Saga of the Flying Hostesses”. The film takes place during Carnival Time in Rio De Janeiro. As unconfined joy wafts its way through the streets, the lives of several fabulously wealthy visitors and a group of voluptuous stewardesses intersect, sometimes with startling results. Sylvia Koscina and Mylene Demongeot are among the visual delights of this garish romp. Featuring the music of Antonio Carlos Jobim. END_OF_DOCUMENT_TOKEN_TO_BE_REPLACED 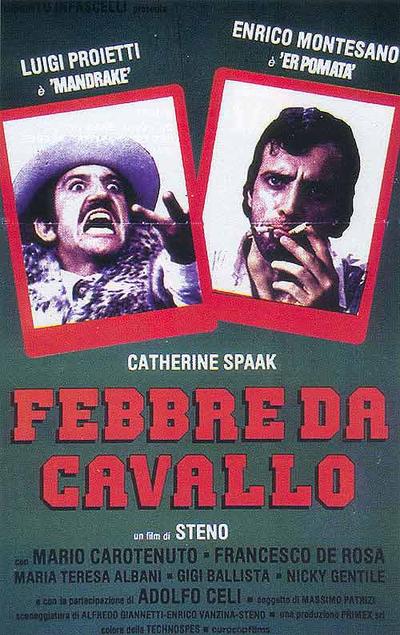 When in the 1976 “Febbre da cavallo” exit in cinema not so much people went to see it. The status of “cult” movie starts from the various nocturnal passages in the private tv, during the ’80. That’s why people loves “Febbre” in this way (a little bit exaggerated). It’s a personal people discover. This is not the “pinnacle” of italian comedy. It’s only a little movie but funny and memorable in some of its parts. There is one thing over others: the actors are really good, better then some late italian comedies, in a time when comedy leaves for sexy italian comedy, the “commediaccia”. So, no Alberto Sordi, not Tognazzi but Gigi Proietti (an excellent, hystrionic theathre actor), and Enrico Montesano, in one of his few good performance on cinema. Enjoy this movie and…”vai cor tango!” END_OF_DOCUMENT_TOKEN_TO_BE_REPLACED

Segment four by Pier Paolo Pasolini is by far the best; a completely MINDBLOWING and DERANGED rendering of OTHELLO played in a puppet theatre with human marionettes!
TOTÒ has the main role in this, and also in segment 2, where he hates Italian beatniks and stalks them as THE SUNDAY MONSTER! Both segments are very funny in completely different ways, but segment 2 would probably not have worked without Totò.
Segment 5 is completely unlike everything else; four minutes short, based on a animated cartoon by Pino Zac, and with Silvana Mangano as the Queen of England, and with guest appearances by James Bond (model Sean Connery)! The other three segments are fully watchable, although not so FAR OUT as number 2, 4 and 5. END_OF_DOCUMENT_TOKEN_TO_BE_REPLACED