Susanne Bier – Pensionat Oskar AKA Like It Never Was Before (1995)

Quote:
An offbeat but very watchable black comedy about a hotel handyman who precipitates the breakup of a family, “Like It Never Was Before” could get solid box office returns both in Sweden and abroad, with careful handling.

Pic is the first script by popular gay writer and standup comic Jonas Gardell, a well-known media personality in Sweden, whose wit targets both gays and gay-bashers. His books are always instant bestsellers. END_OF_DOCUMENT_TOKEN_TO_BE_REPLACED

Plot Summary for Brødre (2004)
Michael (Ulrich Thomsen) has everything under control: a successful military career, a beautiful wife (Connie Nielsen) and two daughters. His younger brother Jannik (Nikolaj Lie Kaas) is a drifter, living on the edge of the law. When Michael is sent to Afghanistan on a UN mission the balance between the two brothers changes forever. Michael is missing in action – presumed dead – and Sarah is comforted by Jannik, who against all odds shows himself capable of taking responsibility for both himself and the family. It soon becomes clear that their feelings have developed beyond mutual sympathy. When Michael comes home, traumatized by being held prisoner in the mountains of Afghanistan, nothing is the same. END_OF_DOCUMENT_TOKEN_TO_BE_REPLACED 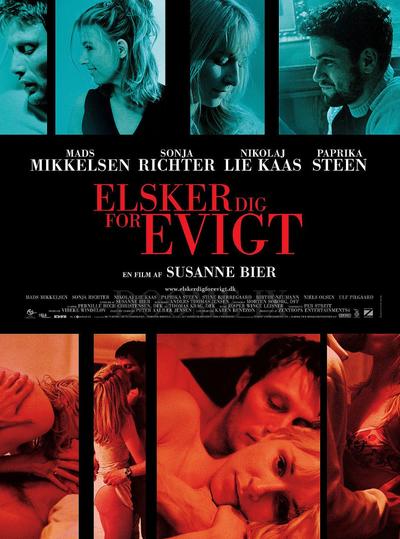 Quote:
Cecilie is devastated when her fiance Joachim is seriously injured in a car accident and is paralysed from the waist down. She begins an affair with Niels, a doctor at the hospital where Joachim is being treated. Their relationship is further complicated by the fact that the doctor’s wife Marie was the driver that caused the accident in the first place. END_OF_DOCUMENT_TOKEN_TO_BE_REPLACED