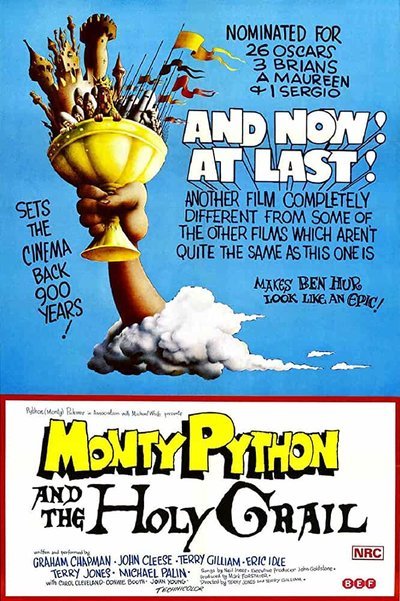 Synopsis:
History is turned on its comic head when, in tenth century England, King Arthur (Graham Chapman) travels the countryside to find knights who will join him at the Round Table in Camelot. Gathering up the men is a tale in itself but after a bit of a party at Camelot, many decide to leave only to be stopped by God, who sends them on a quest: to find the Holy Grail. After a series of individual adventures, the knights are reunited but must face a wizard named Tim the Enchanter (John Cleese), killer rabbits and lessons in the use of holy hand grenades. Their quest comes to an end however when the Police intervene – just what you would expect in a Monty Python movie. END_OF_DOCUMENT_TOKEN_TO_BE_REPLACED

Quote:
Why are we here, what’s it all about? The Monty Python-team is trying to sort out the most important question on Earth: what is the meaning of life? They do so by exploring the various stages of life, starting with birth. END_OF_DOCUMENT_TOKEN_TO_BE_REPLACED 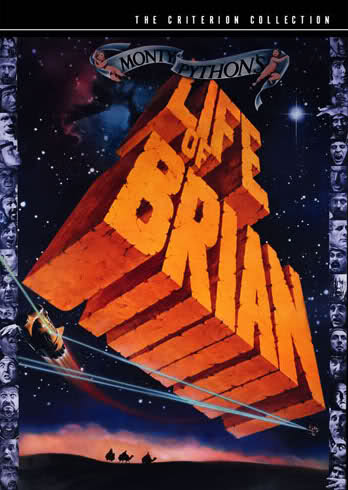 Synopsis
“allmovie” wrote:
On a midnight clear 2,000 years ago, three wise men enter a manger where a babe is wrapped in swaddling clothes. It is an infant called Brian…and the three wise men are in the wrong manger. For the rest of his life, Brian (Graham Chapman) finds himself regarded as something of a messiah — yet he’s always in the shadow of this other guy from Galilee. Brian is witness to the Sermon of the Mount, but his seat is in such a bad location that he can’t hear any of it (“Blessed are the cheesemakers?”). Ultimately, he is brought before Pontius Pilate and sentenced to crucifixion, which takes place at that crowded, nonexclusive execution site a few blocks shy of Calvary. Rather than utter the Last Six Words, Brian leads his fellow crucifixees in a spirited rendition of a British music-hall cheer-up song “Always Look on the Bright Side of Life.” The whole Monty Python gang (Chapman, John Cleese, Michael Palin, Eric Idle, and Terry Gilliam) are on hand in multiple roles, playing such sacred characters as Stan Called Loretta, Biggus Dickus, Deadly Dirk, Casts the First Stone, and Intensely Dull Youth; also showing up are Goon Show veteran Spike Milligan and a Liverpool musician named George Harrison. END_OF_DOCUMENT_TOKEN_TO_BE_REPLACED