Josef von Báky – Münchhausen AKA The Adventures of Baron Munchausen (1943)

A silly goose falls under the spell of a bad wolf, but all the other animals unite in helping her. END_OF_DOCUMENT_TOKEN_TO_BE_REPLACED

Quote:
The latest film by Hartmut Bitomsky is, just like much of his early work, a original film essay about film and film history. Just as in earlier films, he makes inventive use of the potential offered by the medium video to analyse films.The history of the UFA is the story of a risky financial venture in the twenties and a propaganda instrument in the thirties. Bitomsky’s approach stands out because he involvesthis social and political context in investigating and dissecting films. END_OF_DOCUMENT_TOKEN_TO_BE_REPLACED

Synopsis:
‘Hans Albers stars as Werner Holk, an engineer who is working with Professor Achenbach on a machine that will turn lead into gold. When an “accident” occurs that costs the Professor his life, Holk swears vengeance, and determines that the mastermind behind the sabotage was Scottish millionaire John Wills, who has his own rival group working on the same machine. Wills actually hires Holk on to help make his machine a success, and while at first Holk is determined to destroy Wills’ effort from within, when Holk meets Wills’ daughter Florence he begins to second guess his mission.’
– AlsExGal END_OF_DOCUMENT_TOKEN_TO_BE_REPLACED

This compilation film focuses on the contents of Nazi propaganda shorts such as “The Beauty of Work” (1934), “We Have No Problems” (1933), or “The Will To Live” (1944) that preceded the feature films in German movie theaters between 1933 and 1945. The shorts reveal that men and women workers were idealized, uniformity was stressed, optimism in the face of adversity was the goal, and, in general, all the classic lies that dictatorships use to control and mold their citizens are featured. Deutschland Bilder would be offensive to many because of its content alone, even more so when one remembers what these same Nazis were doing in the extermination camps. ~ Eleanor Mannikka, All Movie Guide END_OF_DOCUMENT_TOKEN_TO_BE_REPLACED

Plot
Der Sieg des Glaubens (English: The Victory of Faith) is the first documentary directed by Leni Riefenstahl, who was hired despite opposition from Nazi officials that resented employing a woman — and a non-Party member too. Her film recounts the Fifth Party Rally of the Nazi Party, which occurred in Nuremberg from August 30 to September 3 in 1933. END_OF_DOCUMENT_TOKEN_TO_BE_REPLACED 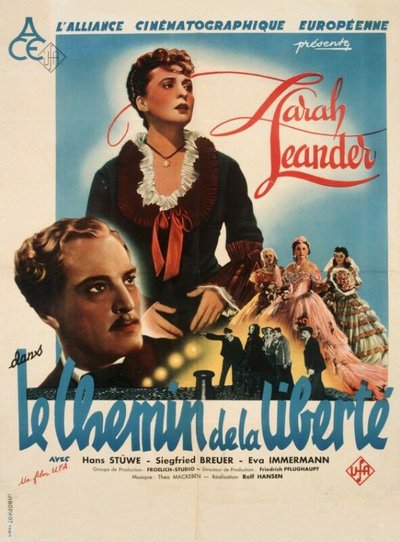 Synopsis:
‘In Vienna, during the 1848 Revolution, opera singer Antonia Corvelli marries Detlev von Blossin, a rich landowner. But, as she refuses to give up her career, her infuriated husband returns to Pomerania without her. After falling into the clutches of the cruel and wicked count Stefan Oginski, whose lover she unfortunately becomes, Antonia has no other choice but to pass for dead in order to escape him. She then returns to Italy where she joins small theater companies under various aliases. Until one day she is overtaken by her fate…’
– Guy Bellinger END_OF_DOCUMENT_TOKEN_TO_BE_REPLACED