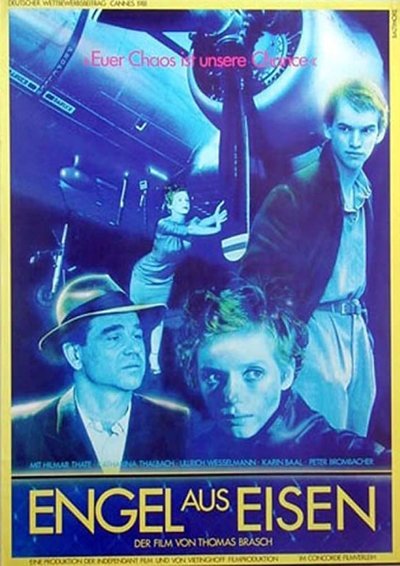 Berlin, 1948/1949. The town is divided into two sectors. The world is close to World War III. West Berlin is kept alive by the biggest airlift in history. While the city is deadlocked, three teenagers set out to fulfil their dreams: Völpel (Hilmar Thate), ex-executioner, receives secret information from Police Headquarters. Gladow (Ulrich Wesselmann), 17 years old, wants to be like Al Capone. Lisa Gabler (Katharina Thalbach) dreams of buying Berlins biggest revue venue the ‘Friedrichstadt Palast.’ But suddenly, the droning of the airplanes ceases? Based on a true story from the times of the ‘Berlin Blockade.’ END_OF_DOCUMENT_TOKEN_TO_BE_REPLACED

Science, it’s technical use, the breaking of social bonds, it’s rules – that’s the experiment’s name. Sakko and Oi meet by chance.
She’s a casual prostitute, he’s unemployed. They’re the experimental subjects. A play about free time, our time, and unemployment.

Mercedes is the adaptation of Brasch’s own play by the same title. It was produced for dutch television in 1985. END_OF_DOCUMENT_TOKEN_TO_BE_REPLACED “Thomas Brasch’s Domino opens with glimpses of the Kurfürstendamm shrouded in snow, scenes of Christmas bustle. Lisa, a successful actress at the Schiller Theater, drops off her daughter at the Bahnhof Zoo and faces the presentiment of holidays to be spent alone. In the week to come, her life will come unraveled, her taken-for-granted security called into question. An undercurrent of the inexplicable and the unexpected will grip the artiste and ultimately sweep her into oblivion. Domino focuses on a woman living in abeyance…. Everywhere she turns the past seems to be on her trail: she confronts visions of her deceased mother (also an actress) while thinking of her own daughter. She learns that the director Lehrter, who seeks to engage her to star in his comeback production of Goethe’s Stella, may very well be her father [and learns also] of his internment in a concentration camp. Encounters on the street irritate and befuddle her. Passersby speak of mass unemployment, worry about pending war, and wander about sobbing, disoriented and confused…. END_OF_DOCUMENT_TOKEN_TO_BE_REPLACED