Hamlet is going crazy. His father has died suddenly of a strange disease, and his mother has married her deceased husband’s brother, of all people, after just one month. Hamlet has nighttime visions of his father, who claims his brother poisoned him, and exhorts Hamlet to take revenge and kill his new stepfather. Hamlet acts the part of the crazy man in order to hide his plans, and loses his grip on reality in the process. The whole world becomes a stagnant swamp to him. Desire and sexuality become a threatening abyss. The friends surrounding him turn out to be spies deployed by his stepfather to keep an eye on him. END_OF_DOCUMENT_TOKEN_TO_BE_REPLACED 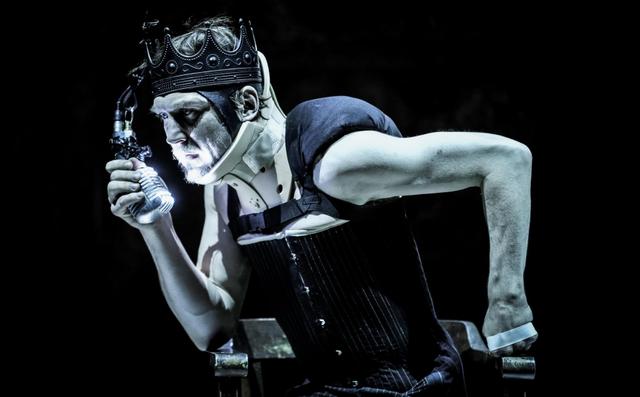 Richard is hideous. Born prematurely, he is a deformed, hobbling, hunchbacked cripple who, on the battlefields of the Wars of the Roses – which flared up after the death of Henry V – served his family and above all his brother, Edward, well. Now Edward is king, thanks to a number of murders carried out on his crippled brother’s own initiative. But the end of war brings Richard no peace. His hatred for the rest of the world, to which he will never belong, lies too deep. And so he does what he does best and kills some more, clearing away every obstacle that lies in his path to becoming king. If fate prevents him from being part of a society of those blessed by good fortune, he will at least lord over them. He plays off his rivals against each other with political cunning, unscrupulously exploits the ambitions of others for his own ends and strides spotless through an immense bloodbath until there is no one left above him and the crown is his. END_OF_DOCUMENT_TOKEN_TO_BE_REPLACED