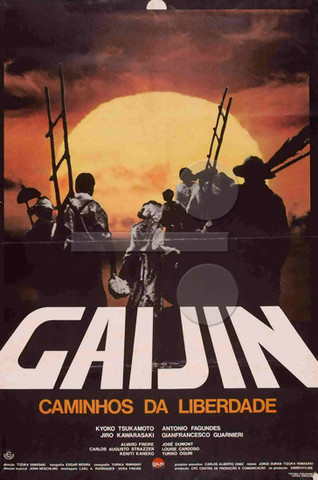 The first film of Tizuka Yamasaki, a young Brazilian woman of Japanese ancestry, Gaijin: Roads to Freedom is based on the experiences of Yamasaki’s own grandmother in coming to Brazil in the wave of immigration at the turn of the century, when Japanese were encouraged to join the Brazilian labor force during that country’s coffee boom. In an effort to comply with the immigration agents’ preference for family units, a very young Titoe marries Yamada, a man whom she has never met, and the two leave for Brazil. Life on the plantation is close to slavery: workers, forced to buy food at the plantation store, are presented with falsified accounts, and at the end of the year are still in debt to the plantation. The film treats relations between Brazilian plantation owners and foremen and their Japanese laborers (a group which, traditionally, did not cause labor problems), as well as relations between the Japanese and other immigrant groups, in particular the Italians. A compelling story of a woman’s struggle to survive, spanning many years, is juxtaposed with the growing union consciousness among immigrant workers in Brazil. END_OF_DOCUMENT_TOKEN_TO_BE_REPLACED