Quote:
Based on the British TV serial by Nigel Kneale (who reportedly disliked the finished product), the film stars Brian Donlevy, repeating the role of Professor Quatermass. This time, the good professor must contend with a `meteor shower` which turns out to be a secret alien invasion. The extraterrestrials arrive on earth in rocklike vehicles, then take over the minds and nervous systems of earthlings, the better to go about their business undetected. Subliminally a cruel satire of British bureaucracy and obfuscation, Enemy from Space also works on a pure-horror level, building slowly and methodically to a powerhouse finale. For many years a `lost` film due to legal tangles, Enemy from Space has recently become available again on video and cable TV. – All Movie Guide END_OF_DOCUMENT_TOKEN_TO_BE_REPLACED

After surviving a traumatic car accident, a race car driver travels to the Cote D’Azur to recover but is plagued by an urge to strangle his wife. END_OF_DOCUMENT_TOKEN_TO_BE_REPLACED 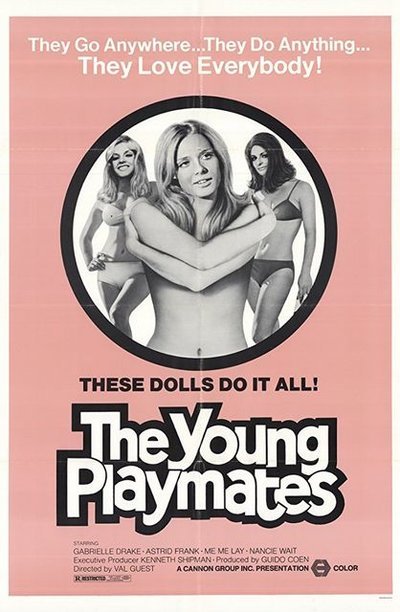 Four young women from Europe and Asia, recently arrived in England, begin their new jobs as Au Pairs. They quickly find that the English are not as stuffy and staid as they appear, and the young ladies are soon spending more time in bed than on the job. END_OF_DOCUMENT_TOKEN_TO_BE_REPLACED 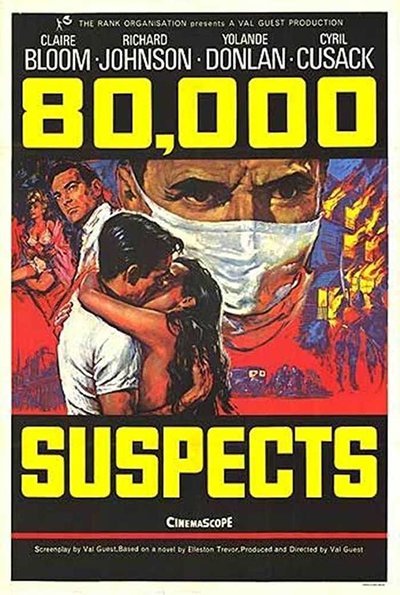 Synopsis:
British doctor Richard Johnson arrives in the city of Bath, where a smallpox epidemic has broken out. If he has any hope of stemming the disease, he must locate and isolate its source. As if he hasn’t got enough trouble on his hands, Johnson must contend with his failing marriage to Claire Bloom. Director Val Guest lifts 80,000 Suspects out of the ordinary with his inventive utilization of darkness and shadows.
— Hal Erickson. END_OF_DOCUMENT_TOKEN_TO_BE_REPLACED

Synopsis:
In the countryside of London, a rocket crashes on a farm and Professor Bernard Quatermass and Scotland Yard Inspector Lomax arrive in the spot. The rocket was launched by Prof. Quatermass with the astronauts Victor Carroon, Greene and Reichebheim; however only Carroon is found very sick in the cabin. He is transported to a private clinic to stay under observation despite the protests of his wife Mrs. Judith Carroon. She bribes a nurse to bring Carroon to her and she finds that he is transforming into a monster. Carroon escapes, killing people and animals during his metamorphosis while the Scotland Yard is hunting him down and Dr. Quatermass discovers that his process is an alien invasion. END_OF_DOCUMENT_TOKEN_TO_BE_REPLACED

Plot Synopsis:
An intensely stoic Andre Morell leads a group of POWs, interned under the sadistic rule of Commander Yamamitsu, who has vowed to massacre them all and raze the camp to the ground should Japan surrender to the Allies. When the British prisoners find out via their radio that this has indeed happened, they must keep the news from their captors at all costs. Their task is made even more difficult when the Japanese capture an American pilot, who they are determined to strip of any useful information. The POW’s must find a way to escape before it’s too late. END_OF_DOCUMENT_TOKEN_TO_BE_REPLACED Au Pair Girls’ is a cheesy “naughty” sexploitation comedy from the early 70s. During this period before hard core porn was readily available these kinds of movies were very popular in England. They mixed unsophisticated slapstick comedy, Benny Hill-like double entendres and lots of naked babes. Thirty years later they are enjoyable as kitsch but have little else going for them. ‘Au Pair Girls’ story concerns the misadventures of four beautiful girls sent to England to work as (yes, you guessed it!) Au Pair girls. They are Randi (Gabrielle Drake), Astrid (Anita Sector), Nan (Me Me Lay) and Christa (Nancie Wait). Randi ends up losing her clothes in a barn after the son of her employer (Richard O’ Sullivan from the popular 70s sit-com ‘Man About The House) gives her a lift and his car breaks down in the country. Astrid, a nutty Swedish girl obsessed with colour TV, gets picked up by a Sheik (Ferdy Mayne) while on a date at a casino. Nan is hired by Lady Tryke (Rosalie Crutchley) to be a companion for their socially inept but musically gifted son (Julian Barnes), who quickly falls in love with her. Christa is taken to a club by her employers liberated daughter Carole (Lyn Yeldham) and is seduced by a rock singer Ricky Strange (Steve Patterson). People raised on British sit-coms of the 60s and 70s will notice several familiar faces in the supporting cast, most notably John Le Mesurier (‘Dad’s Army’), who plays Richard O’Sullivan’s Dad, and Trevor Bannister (‘Are You Being Served?’), who plays his photographer pal. END_OF_DOCUMENT_TOKEN_TO_BE_REPLACED