As his first assignment, lieutenant Drogo is sent to an isolated fortress on the borders of a desert and of a range of high mountains. The mission of the garrison is to prevent a possible incursion by the fearsome Tartars, coming from beyond the desert. Some fellow officers are eagerly awaiting an attack; some no longer want to believe in it; others take advantage of the vague threat to further their career. All of them are sacrificing everything — health, youth, friends, family — for a distant military ideal: leading the defence against the onslaught of the enemy. But in the vast emptiness surrounding the fortress, nobody has ever sighted the Tartars… END_OF_DOCUMENT_TOKEN_TO_BE_REPLACED

Quote:
Lorenzo’s older brother Marcello is a playboy who has broke the heart of a cabaret singer named Aida (Claudia Cardinale). When she shows up one evening at their home Marcello unable to handle his own dirty business sends Lorenzo (Jacques Perrin) out to get rid of her. Lorenzo fails in love Aida the moment he lays he eyes upon her. Feeling guilty about the way his brother treated her he does his best to help her out. END_OF_DOCUMENT_TOKEN_TO_BE_REPLACED

Synopsis:
A Congo rebel leader is captured and imprisoned with two white felons in this 81-minute feature containing religious symbolism and condemnation of colonial exploitation. Maurice Lalubi is thrown in jail with a soldier and an Italian thief. The trio endures torture at the hands of their captors, while a newly formed military regime decides the fate of the insurgent. The entire horror of the confrontation is seen through his eyes throughout Lalubi’s interrogation and torture. His imminent demise could turn him into a martyr and spell trouble for the new government dictator in this sometimes violent film. END_OF_DOCUMENT_TOKEN_TO_BE_REPLACED

A touching story of brothers raised apart and then brought together under tragic circumstances, this drama by Valerio Zurlini remains true to Vasco Pratolini’s novel. Told in a series of flashbacks as Enrico (Marcello Mastroianni) remembers the past, the brothers are separated after their mother dies. Enrico is raised by a humble guardian who works as a butler, his brother Lorenzo (Jacques Perrin) is taken in by a grandmother who gives him all he wants or needs. Enrico grows up to become a hard-working journalist, spending most of his time in Rome. Lorenzo is a young idealist living in Florence with no real need to work. The brothers rarely see each other, but when they finally meet after an extended absence, Lorenzo is gravely ill and dying. (-allmovie.com) END_OF_DOCUMENT_TOKEN_TO_BE_REPLACED

At the height of World War II in fascist Italy, spoiled young Carlo Caremoli enjoys a beach vacation with his friends, oblivious to world events due to the protection provided by his father, Ettore. When Carlo meets older widow and mother Roberta Parmesan, he is smitten despite her reluctance to get involved. Carlo persists, and just as he and Roberta find happiness, the brutal reality of the war crashes in upon them. END_OF_DOCUMENT_TOKEN_TO_BE_REPLACED 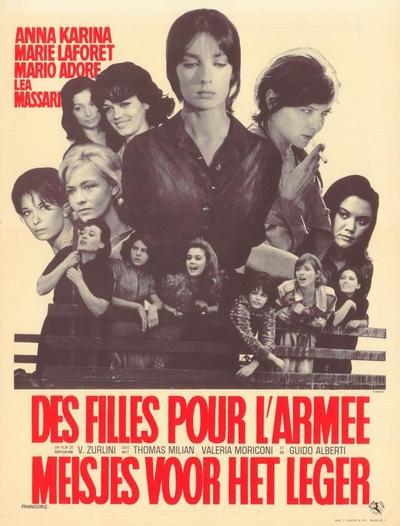 Quote:
Shot almost entirely on location in Greece in an awesome deep-focus newreel-documentary style black-and-white (with the emphasis on the blacks), `Le Soldattesse’ is the story a group of prostitutes that have been recruited for the military brothels of Italian soldiers during WW II, and the long truck ride they take trying to get to their destinations through a war-torn mountainous area. Three military men of different rank have the job of taking them through, and the relationships they develop with the girls on this trip is the real subject matter of the film. Sublimely beautiful Sixties New-Wave icon Anna Karina plays the most cheerful of the ladies of leisure but there are no real leads in the film, all 5 or 6 of the main characters are given equal screen time and Zurlini never falters once as he draws poetic and hilarous performances full of insights from each character. On a higher level “Le Soldattese” becomes a deep examination of one relatively minor but revealing absurdity (prostitutes being carried to brothels in a war-torn area to boost troop morale) overlapping the bigger, related absurdity of the war itself and Mussolini-era fascism. END_OF_DOCUMENT_TOKEN_TO_BE_REPLACED