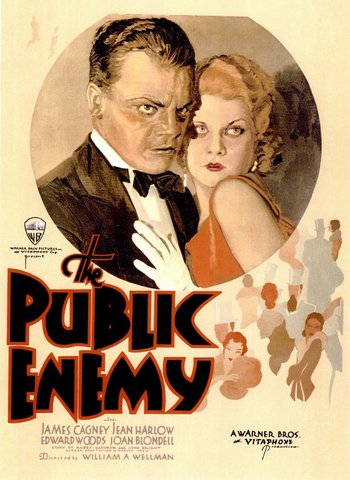 Quote:
A young hoodlum rises up through the ranks of the Chicago underworld, even as a gangster’s accidental death threatens to spark a bloody mob war. END_OF_DOCUMENT_TOKEN_TO_BE_REPLACED

Plot: Chu Chu Ramirez is a Mexican farm laborer in California, with lofty ideals, who is very proud of his new American citizenship. During his time off, he tries to befriend the alcoholic bar girl Nancy. After working for a month for the subsistence farmer Mr. Ames and his frustrated wife, Chu Chu discovers that his paycheck bounces and Ames stalls in paying him. Just after a confrontation between Ames and Chu Chu, Ames is accidentally wounded by his own shotgun and he and his wife blame it on Chu Chu. Despite the support of his friends and sympathetic sheriff, Chu Chu is given a year’s sentence. Written by Will Gilbert END_OF_DOCUMENT_TOKEN_TO_BE_REPLACED

Plot: Jack Moffitt’s original story deals with the realities of work for 1930s fliers. Jim Blane (Richard Barthelmess) is booted from his job as a commercial pilot when investigators fault him for an airliner crash in rough weather. He meets circus barnstormer Jill Collins (Sally Eilers) just as her pilot brother crashes to his death, and becomes her partner both in the air and in bed. They check into hotels separately but always take adjoining rooms.
Jim doesn’t believe in marriage for fliers, and Jill soon takes up with his younger brother Bud (Tom Brown), also a pilot. And Jim’s timing is also off … although Jill loves him, she accepts Bud’s offer of marriage. Jim takes off for dangerous jobs in parts unknown, but we know he’ll have to come back to claim what’s his. Plot summary by ethanedwards. END_OF_DOCUMENT_TOKEN_TO_BE_REPLACED