Plot: This is the sixth movie in the Boston Blackie series. An ex-thief helps some fellow ex-cons adjust to life as defense workers, only to get involved with a robbery investigation. END_OF_DOCUMENT_TOKEN_TO_BE_REPLACED

Hollywood 1950: The successful producer Larry O’Brian arrives in Los Angeles to found a motion picture company. He buys an old studio which was unused since the days of silent movies. He’s shown the office where the famous director Franklin Farrara was shot. The case hasn’t been solved until now, although there were many suspects. O’Brian becomes fascinated by the subject and wants to shoot a movie about it. He investigates himself and soon gets into danger himself. Written by Tom Zoerner END_OF_DOCUMENT_TOKEN_TO_BE_REPLACED

Synopsis:
The 4th film of the Columbia series based on the CBS radio program, “The Whistler”, finds wealthy John Sinclair, with no health or friends, being advised by his doctor to take a long vacation. Heading for the Great Lakes, he becomes ill in the cab operated by Ernie Sparrow an is taken to a clinic where he meets nurse Joan Martin, who is engaged to intern Fred Graham. Doctors now tell him he has only a few months to live and advise him to go to Maine (where, evidently, it will seem longer.) He asks Joan to marry him, promising to leave her his fortune. END_OF_DOCUMENT_TOKEN_TO_BE_REPLACED

You trust no-one, fear the worst, and blunder from one dead-end into another. Dark faces and sharp dressers in sinister doorways. Share a cab with a bawling waif, a dying woman on borrowed time, and a suspicious driver. Stop! Get out! Onto dark streets, smoke-filled dives, cafés on the edge of purgatory, and hellish rooms for rent. A young girl in pig-tails as likely to betray you as the mother with arms folded in menace then her cold hand out for payment in advance. Nowhere left to run. The rented room a cell you can’t leave. END_OF_DOCUMENT_TOKEN_TO_BE_REPLACED

In order to smash a dope ring, a federal agent (Howard Duff) makes a deal with an Alcatraz convict (Dan Duryea) to help him infiltrate the ring. END_OF_DOCUMENT_TOKEN_TO_BE_REPLACED

Synopsis:
Eccentric millionaire Fredrick Loren and his 4th wife, Annabelle, have invited 5 people to the house on Haunted Hill for a “haunted House” party. Whoever will stay in the house for one night will earn ten thousand dollars each. As the night progresses, all the guests are trapped inside the house with ghosts, murderers, and other terrors. END_OF_DOCUMENT_TOKEN_TO_BE_REPLACED 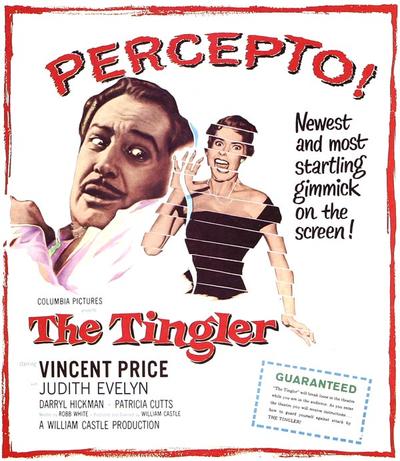 IMDB:
Dr. Warren Chapin is a pathologist who regularly conducts autopsies on executed prisoners at the State prison. He has a theory that fear is the result of a creature that inhabits all of us. His theory is that the creature is suppressed by our ability to scream when fear strikes us. He gets a chance to test his theories when he meets Ollie and Martha Higgins, who own and operate a second-run movie theater. Martha is deaf and mute and if she is unable to scream, extreme fear should make the creature, which Chapin has called the Tingler, come to life and grow. Using LSD to induce nightmares, he begins his experiment.
END_OF_DOCUMENT_TOKEN_TO_BE_REPLACED