SYNOPSIS:
William Klein goes on the hunt for Little Richard, the legendary “Architect of Rock and Roll”, who quit show business in 1957 at the height of his fame to become an evangelist. Richard was then lured back to secular music in the 1960s and 70s, but the excesses of stardom led him to a second retreat from the stage. For years he struggled to reconcile his religious calling with his flamboyant rock-and-roll persona, and at the time of filming, Klein finds Little Richard selling “Black Heritage Bibles” for a Nashville couple. Sensing that his image is being exploited, Richard quits his sales position and deserts the film. But Klein turns this into an opportunity to reconstruct Richard’s personality through the words of his family and friends in his native Macon, Georgia, and to celebrate his status as a cultural icon by filming scores of Little Richard impersonators and adoring fans in Hollywood. END_OF_DOCUMENT_TOKEN_TO_BE_REPLACED

Quote:
Staged in Algiers, the first Pan-African Cultural Festival was a momentous event, bringing together musicians and dancers from throughout the continent with many first-worlders joining in the jams. It was a moment of great postcolonial jubilation as representatives of national liberation movements converged on an Algeria that had gained its independence just seven years earlier. This energetic doc includes such luminaries of the moment as Amilcar Cabral, a writer who led the struggle in Guinea-Bissau; Miriam Makeba, the great African singer who was then married to Stokely Carmichael; Houari Boumédienne, Algeria’s military dictator; Stanislas Adotevi, the Benin philosopher who penned Negritude and Negrologists; and Eldridge Cleaver, who was living in Algiers, overseeing the Black Panther contingent at the festival. Klein’s coverage captures the astounding cultural mix, but also the militant resolve that permeated the gathering, making agit-appropriate correlations to the United States and its own colonial misadventure, the Vietnam War. END_OF_DOCUMENT_TOKEN_TO_BE_REPLACED 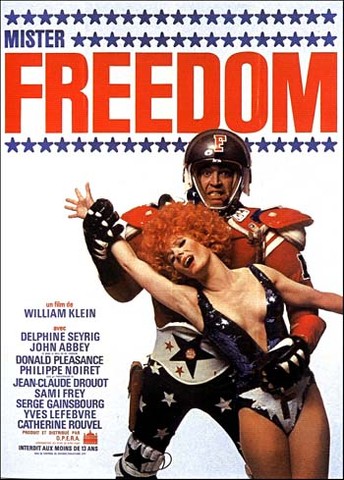 Mr.Freedom is a militaristic moron of a superhero. In his secret identity he is a United States sheriff, but when he enters his hidden closet hidden in his office behind a large American flag, he transforms into the patriotic superhuman. He takes orders from Doctor Freedom, the controller of Freedom Inc, who orders him to go to France and stop it from falling prey to the evils of Communism after the death of Freedom’s counterpart, Capitaine Formidable. Getting a less than rapturous welcome from the French, Mr.Freedom decides to save them all anyway…by destroying the entire country and everyone in it if he has to. END_OF_DOCUMENT_TOKEN_TO_BE_REPLACED