The visualization of a day in the life of an alcoholic, teeming with images of anxiety and Kafkaesque paranoia. Adapted from Marek Hlasko’s novel The First Step in the Clouds, THE NOOSE is movie as delirium tremens, as a young man escapes his cramped flat to wander from bar to bar, unable to escape the trap of isolation. THE NOOSE tightens as Kuba, nearly saved by the love of a good woman, dives deeper into hallucinatory intoxication. END_OF_DOCUMENT_TOKEN_TO_BE_REPLACED

Quote:
A drama about unfulfilled love (screenplay by Kazimierz Brandys based on his own short story). The film is for the most part the reminiscence of a radio actress named Felicja, who thinks back to the World War II occupation of Poland by Germany, when she hid a man (Wiktor) sought by the Gestapo in her apartment for a prolonged period. In order to remove suspicion from herself, she began to appear on stage, which rendered her a collaborator in the eyes of her peers from the acting community. Felicja made this sacrifice for Wiktor because she loved him and in spite of her love being unreturned. On the other hand, Wiktor perceives her sacrifice as a burden though Felicja does not notice this. END_OF_DOCUMENT_TOKEN_TO_BE_REPLACED

Quote:
The film shows the revival of Warsaw after the war. The city slowly rises from the fall, mainly thanks to the people who work hard to rebuild their capital. The documentary, despite its obvious propaganda message, has been made for heart-rending, and today its paintings represent an undeniable historical and archival value. END_OF_DOCUMENT_TOKEN_TO_BE_REPLACED

Quote:
During the Napoleonic Wars a young French officer seeks shelter in an abandoned building in the town of Saragossa. In this building he discovers a rather odd book, and when an enemy officer attempts to arrest him, the the second officer is also drawn to narrate the book which seems to have been written by his own grandfather (Zbigniew Cybulski). Soon the officer’s grandfather finds himself immersed within a story of fleeing gypsy cannibals, married to Muslim sisters … in his dreams, and on the run from the Spanish Inquisition. But when he meets up with a Cabalist and his storytelling friends, that is when things start to get truly interesting. END_OF_DOCUMENT_TOKEN_TO_BE_REPLACED

Tadeusz (Jan Kreczmar) is a Polish veteran of World War II who fled to London at the end of the war, leaving behind his wife Zofia (Irena Eichlerówna) and son, Maciek (Zbigniew Cybulski), who disappeared when he was 12 years old. Tadeusz returns to Kraków to discover that Maciek is alive, his wife may have been a partisan and that his son may have turned in his own mother in to the authorities. During Maciek’s struggle to understand his parents’ history, questions of collaboration with the Gestapo and Home Army retribution arise. Has pictures the mystical lost boy in a dark fairy-tale forest, full of the ghosts of the war and wholesale executions. The hypnotic quality of these excursions foreshadows the mesmerizing passages of Has’s later film, The Hour-Glass Sanatorium. END_OF_DOCUMENT_TOKEN_TO_BE_REPLACED

Quote:
In the 18th century, a recently deceased young man is exhumed by a gravedigger, suddenly revives, and then launches into the story of his highly eventful life. Brought up in a puritanical household, Robert is seduced by a mysterious stranger into killing his wine-, woman- and song-loving brother. What follows is a descent into a hallucinatory hell, where reality and illusion merge, as Robert’s evil doppelganger sins with terrible abandon–and Robert stands accused. END_OF_DOCUMENT_TOKEN_TO_BE_REPLACED

Wojciech Has – Sanatorium pod klepsydra AKA The Hour-Glass Sanatorium (1973) 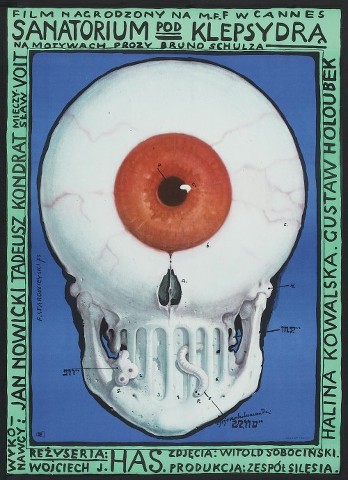 Set in pre- World War II era. A young man is on a strange train to see his dying father in a sanatorium. But the place is going to ruin and recalls a lot of memories from the past. He is beset by soldiers from the past, colonial black mercenaries, girls from his early life, and his parents. It is an interior adventure, with unusual atmospheric flair and extraordinary sets. END_OF_DOCUMENT_TOKEN_TO_BE_REPLACED