One of the most radical and influential works of experimental television produced by the famous couple of the late 60s, Yoko Ono and John Lennon.

In November 1968 work began on one of one of John & Yoko’s most ambitious film ventures, a 75-minute mini-feature called Rape. It starred Eva Majlata, a 21 year old Hungarian actress who couldn’t speak English. She cannot escape the prying attentions of the camera which follows her around the streets of London, through a park, allowing her no privacy and almost causing her to walk into the path of a truck. She attempts to escape in a taxi, but is still followed. She is eventually cornered in an apartment from which she apparently cannot escape and her tearful pleas to the camera remain ignored. Rape was shot when John and Yoko were both at Great Charlotte Street Hospital following Yoko’s miscarriage. The cameraman was Nick Knowland, who worked on most of John and Yoko’s productions. END_OF_DOCUMENT_TOKEN_TO_BE_REPLACED 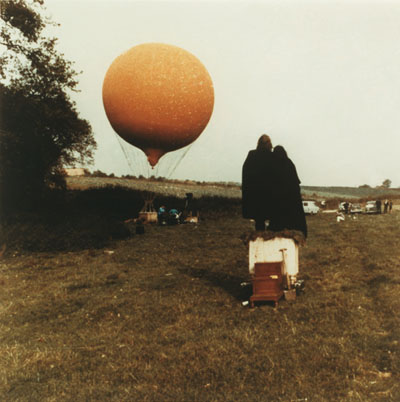 Quote:
What a perfect film…..short and simple, Ono takes a camera and a boom mike onto a hot air balloon, kicks the rope, and starts the camera and lets us watch as it goes above the clouds for a 17 minute shot. Key things to notice: A roll of 16mm film films only 14 minutes yet the film runs for 17, meaning somewhere in the clouds Ono had another camera loaded and started when the first one ran out, yet somehow the splice is not noticeable and there weren’t any computers at the time to fix this sort of thing…..all i can say is optical printing tricks at its best. The last shot, as the balloon rises above the clouds, the wind silences, and the sun becomes visible, is alone worth checking out this timeless classic of experimental film. END_OF_DOCUMENT_TOKEN_TO_BE_REPLACED