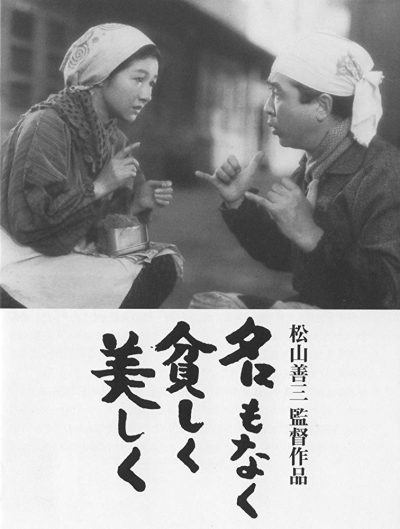 The directorial debut of longtime screenwriter and frequent Masaki Kobayashi
collaborator Zenzo Matsuyama, Happiness of Us Alone is a tour de force of humanist
cinema that stands as a landmark of the changing attitudes towards people with
disabilities in Japan. A sympathetic portrayal of the suffering of a deaf couple (played by
Matsuyama’s own wife, Hideko Takamine, and frequent co-star Keiju Kobayashi) at the
hands of a shell shocked postwar society that treats them like wayward children to be
at turns pitied or exploited, the film prefigures the wave of activist documentaries of the
1970s exploring mistreatment of the disabled by such filmmakers as Kazuo Hara, Noriaki
Tsuchimoto and Mariko Miyagi. Amidst a culture that traditionally sought to hide those
with disabilities from public view, Happiness of Us Alone charts the often disastrous
consequences of attempting to live an independent life in a society that isn’t yet prepared
to accommodate those who are different. END_OF_DOCUMENT_TOKEN_TO_BE_REPLACED