Synopsis:
Jim Wormold is an expatriate Englishman living in pre-revolutionary Havana with his teenage daughter Milly. He owns a vacuum cleaner shop but isn’t very successful so he accepts an offer from Hawthorne of the British Secret Service to recruit a network of agents in Cuba. Wormold hasn’t got a clue where to start but when his friend Dr. Hasselbacher suggests that the best secrets are known to no one, he decides to manufacture a list of agents and provides fictional tales for the benefit of his masters in London. He is soon seen as the best agent in the Western Hemisphere but it all begins to unravel when the local police decode his cables and start rounding up his “network” and he learns that he is the target of a group out to kill him. END_OF_DOCUMENT_TOKEN_TO_BE_REPLACED 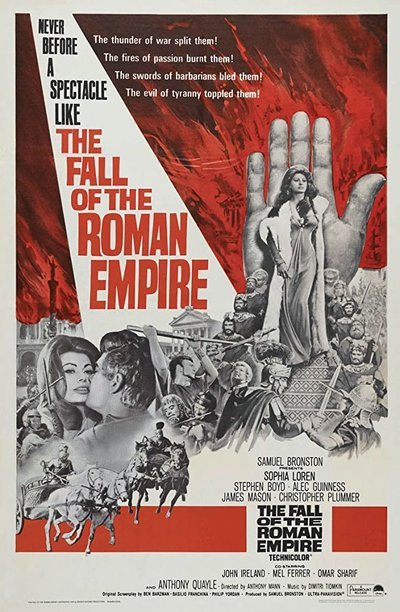 Quote:
Intent on securing peace and prosperity throughout the mighty Roman Empire, the wise diplomat, Emperor Marcus Aurelius, calls together the local governors from all over the Empire, after conquering the Germanic tribes. With this in mind, Marcus has decided to turn over his crown and the much-coveted imperial throne to General Livius, instead of choosing his corrupt son and logical successor, Commodus. As a result, high treason and blind ambition lead to the death of Aurelius by poisoning, paving the way for a new era of oppression, endless machinations, and rapid decline. Now, as darkness prevails on the outskirts of the Empire where the Roman legions struggle to subdue the invading hordes, delusional Commodus declares himself a god, and no one is safe; not even Aurelius’ daughter, Lucilla. Can anyone stop the fall of the Roman Empire? END_OF_DOCUMENT_TOKEN_TO_BE_REPLACED

Mrs. Jacoby, a Brooklyn widow whose only son was killed by the Japanese in World
War II, reluctantly agrees to accompany her daughter, Alice, and her son-in-law, Jerry
Black, on a trip to Japan, where Jerry is to help negotiate a trade agreement. En route by
ship, Mrs. Jacoby’s resentment of the Japanese subsides when she meets Mr. Asano, a
Japanese industrialist whose family also was struck by tragedy during the war. Their
friendship ends, however, when Jerry suspects that Mr. Asano, who is also a
negotiating member of the trade committee, is ingratiating himself with his mother-in-law
for political gain. END_OF_DOCUMENT_TOKEN_TO_BE_REPLACED

Called out of retirement to settle the affairs of a friend, Smiley finds his old organization, the Circus, so overwhelmed by political considerations that it doesn’t want to know what happened. He begins to follow up the clues of his friends past days, discovering that the clues lead to a high person in the Russian Secret service, and a secret important enough to kill for. Smiley continues to put together the pieces a step ahead or a step behind the Russian killers. END_OF_DOCUMENT_TOKEN_TO_BE_REPLACED

Quote:
A gang planning a ‘job’ find themselves living with a little old lady, who thinks they are musicians. When the gang set out to kill Mrs Wilberforce, they run into one problem after another, and they get what they deserve. END_OF_DOCUMENT_TOKEN_TO_BE_REPLACED

Quote:
Film Forum writes:Poor relation Dennis Price, ninth in line to the Dukedom of Chalfont, coolly narrates from prison his ascent to the peerage via serial murder, bumping off one D’Ascoyne after another, from an arrogant playboy, to a bullet-headed general, to a stiff-upperlipped Admiral, to a dotty reverend, to a formidable dowager — all, plus three more, played by Alec Guinness. END_OF_DOCUMENT_TOKEN_TO_BE_REPLACED