Synopsis:
Shortly after a violent encounter with magician Maximilian (Vincent Price), Joe Adams (Henry Fonda) is shot by police. As he lies dying in his apartment, he reflects on his past. The flashbacks follow Joe as he falls in love with young Jo Ann (Barbara Bel Geddes), who is also being courted by Maximilian. Jo Ann begins to favor the compassionate Joe over the possessive magician, and Maximilian heads to Joe’s apartment intending to kill him, resulting in a dramatic standoff. END_OF_DOCUMENT_TOKEN_TO_BE_REPLACED

Goodbye Again, released in Europe as Aimez-vous Brahms? is a 1961 romantic drama film produced and directed by Anatole Litvak. The screenplay was written by Samuel A. Taylor, based on the novel Aimez-vous Brahms? by Françoise Sagan. The film, released by United Artists, stars Ingrid Bergman, Anthony Perkins, Yves Montand, and Jessie Royce Landis. END_OF_DOCUMENT_TOKEN_TO_BE_REPLACED

Synopsis:
In 1942 Warsaw, a Polish prostitute is murdered in a sadistic way. Major Grau, an agent from German Intelligence who believes in justice, is in charge of the investigation. An eyewitness saw a German general leaving the building after a scream of the victim. A further investigation shows that three generals do not have any alibi for that night: General Tanz, Maj. Gen. Klus Kahlenberge and General von Seidlitz-Gabler. The three avoid direct contact with Major Grau and become potential suspects. As Major Grau gets close to them, he is promoted and sent to Paris. In 1944 Paris, this quartet is reunited and Major Grau continues his investigation. Meanwhile, a plan for killing Hitler is plotted by his high command; a romance between Ulrike von Seydlitz-Gabler and Lance Cpl. Kurt Hartmann is happening and Insp. Morand is helping Major Grau in his investigation. The story ends in 1965, in Hamburg, with another, similar crime. END_OF_DOCUMENT_TOKEN_TO_BE_REPLACED

Opera singer Enrico Ferraro, tired of his too many engagements, jumps off the train escaping from his manager and changes to another going to the Riviera. He makes a friend and stops at a village, where (it seems) he can at last have some well deserved holidays, with the added interest of meeting a beautiful girl in the surroundings. END_OF_DOCUMENT_TOKEN_TO_BE_REPLACED

Filmmaker Anatole Litvak was still one year away from his “breakthrough” picture Mayerling when he co-wrote and directed L’Equipage (The Crew). Charles Vanel and Annabella star respectively as a daring WW I aviator and his loving but neglected wife. Ostracized by the other pilots because of his recklessness and standoffishness, Vanel nonetheless befriends a young flyboy (Jean-Pierre Aumont). It is therefore a great source of consternation for Aumont when he discovers that the woman with whom he’s fallen in love is none other than Vanel’s wife Annabella. END_OF_DOCUMENT_TOKEN_TO_BE_REPLACED 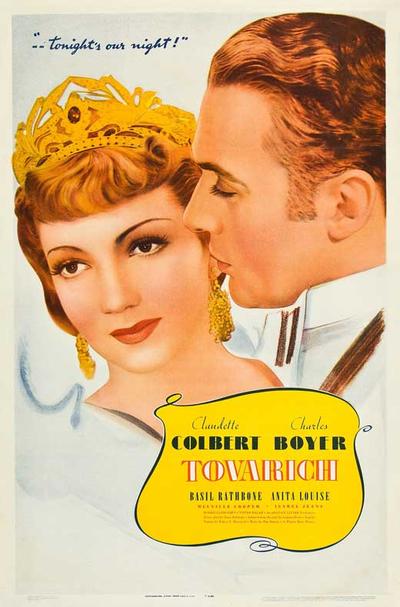 IMDB:
Ousted from their homeland by the Bolshevik revolution, a royal Russian couple find themselves impoverished and living in Paris. They take positions as butler and housemaid in a wealthy household and, owing to their impeccable breeding and manners, excel in their new jobs. But once they are recognized for the royal couple they are, they must face new — and formidable — responsibilities. END_OF_DOCUMENT_TOKEN_TO_BE_REPLACED