Based on the short story “Venus Rising” by George Bradshaw, How to Steal a Million features a rather contrived plot about a wealthy art forger (Academy Award winner Hugh Griffith, Ben Hur) and his beautiful daughter (Hepburn) who are about to be exposed as frauds after they allow one of their fake statues to be displayed in a major art exhibition. In a desperate attempt to save face, Hepburn solicits help from a dashing society burglar (Peter O’Toole, Lawrence of Arabia) to steal the statue before tests can be made to reveal its true origin. The “burglar” isn’t exactly what he appears to be, however, and as they plot their haphazard heist, the two inevitably begin to fall in love. END_OF_DOCUMENT_TOKEN_TO_BE_REPLACED

Synopsis:
Gloriously witty adaptation of the Broadway musical about Professor Henry Higgins, who takes a bet from Colonel Pickering that he can transform unrefined, dirty Cockney flower girl Eliza Doolittle into a lady, and fool everyone into thinking she really is one, too! He does, and thus young aristocrat Freddy Eynsford-Hill falls madly in love with her. But when Higgins takes all the credit and forgets to acknowledge her efforts, Eliza angrily leaves him for Freddy, and suddenly Higgins realizes he’s grown accustomed to her face and can’t really live without it. END_OF_DOCUMENT_TOKEN_TO_BE_REPLACED

Quote:
Susy was recently blinded and recently married. Susy’s husband, Sam, is asked to hold a doll for a woman he doesn’t know as they get off an airplane. The woman disappears. Later, she’s found dead by her former associates, Mike and Carlino, small-time hoods, in Susy’s basement apartment. (Both occupants of the apartment are then absent.) The doll woman’s newer partner in crime, Harry Rote, who murdered her for self-dealing, presses Mike and Carlino into a scheme to recover the doll, which contains a fortune in smuggled heroin. END_OF_DOCUMENT_TOKEN_TO_BE_REPLACED

Quote:
Mark and Joanna Wallace (Albert Finney and Audrey Hepburn) have the kind of marriage where barbs and insults mean more to them than all the endearments ever spoken. During a present day trip to the south of France, they remember other European jaunts they’ve made. On their journey, they experience anew the first glow of passion, the aching loneliness of being apart, the elation of cresting a hill at sunrise, the joy of making up after a fight, and ultimately, they establish what it means to be a couple. END_OF_DOCUMENT_TOKEN_TO_BE_REPLACED

From IMDB:
In 1930, in Belgium, Gabrielle van der Mal is the stubborn daughter of the prominent surgeon Dr. Pascin Van Der Mal that decides to leave her the upper-class family to enter to a convent, expecting to work as nun in Congo with tropical diseases. She says good-bye to her sisters Louise and Marie; to her brother Pierre; and to her beloved father, and subjects herself to the stringent rules of the retrograde institution, including interior silent and excessive humbleness and humiliation. After a long period working in a mental institution, Gaby is finally assigned to go to Congo, where she works with the Atheist and cynical, but brilliant, Dr. Fortunati. END_OF_DOCUMENT_TOKEN_TO_BE_REPLACED

Description: They All Laughed is less a comedy than an extended love letter—there’s a rambling, awkward tone to the film, and in places it’s so unabashedly personal that certain viewers may flinch from the self-exposure. Ritter’s character is openly a Bogdanovich surrogate—he even wears the director’s trademark horn-rimmed glasses, and he helps Stratten escape an overbearing, jealous husband. The romance between Hepburn and Gazzara is rooted in their real-life affair, and the regret felt by Hepburn’s character references her own status as an aging star. And though the humor in the film is squarely in the neo-screwball style of What’s Up Doc—lightning-quick dialogue, pratfalls, double-takes, blink-and-you-missed it innuendo—They All Laughed, with its sudden shifts in tone and lack of conventional narrative, moves that style into the realm of the European art film. END_OF_DOCUMENT_TOKEN_TO_BE_REPLACED 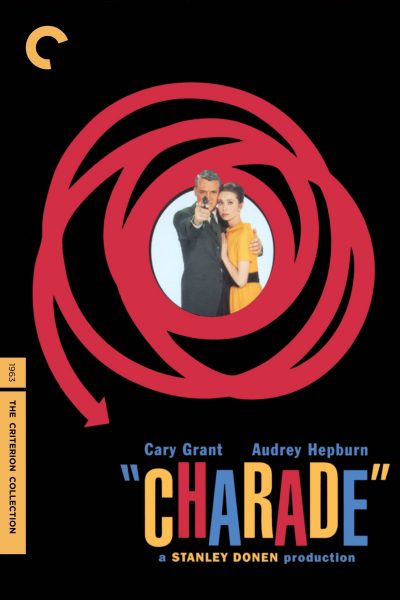 Review:
Stanley Donen’s Charade occupies a special place among sixties thrillers. In an era of spy films resplendent with macho-driven eroticism (the James Bond series), cynicism (Michael Caine’s Harry Palmer series), or farcical irreverence (Casino Royale; the Flint movies, with Charade costar James Coburn), it was the only successful take on the genre to place a woman at its center. END_OF_DOCUMENT_TOKEN_TO_BE_REPLACED