Winnie Slade, a young divorcee, buys an old historic house from nutty Professor Billings, who lives there with his daffy housekeeper and bizarre neighbors, in order to convert it into a hotel. She allows them to continue to live on the property – unaware that the Professor continues to experiment unsuccessfully on traveling salesmen, the bodies of whom have filled the cellar. They are joined by a variety of eccentric characters including a quack doctor who doubles as the town’s sheriff, Winnie’s frenetic ex-husband, an oddball choreographer, a punchdrunk traveling salesman, and a lunatic escapee from the Italian army. END_OF_DOCUMENT_TOKEN_TO_BE_REPLACED

When Dr. Savaard’s experiment in cryonics is interrupted by the short-sighted authorities, his volunteer dies, and he is condemned to death. He vows vengeance if he can survive his own hanging. END_OF_DOCUMENT_TOKEN_TO_BE_REPLACED

Plot:
A cinematic icon, Boris Karloff was one of Hollywood’s greatest actors. Although synonymous with horror, Karloff excelled in other genres as well, providing a lasting legacy of memorable performances. And in this collection of three rarely seen gems drawn from his work at Warner Bros., Karloff shines in a wide range of roles, encompassing mystery, adventure and drama. END_OF_DOCUMENT_TOKEN_TO_BE_REPLACED

Quote:
Army Private Eddie Pratt smuggles his new bride into camp in hopes of having a happy wedding night. Instead they discover a murder. Colonel Rogers of Army Intelligence arrives to take over the case. The prime suspect, Jevries, is well-known to Rogers, who sets out to get a confession from Jevries even though there are plenty of other suspects. In the end, Eddie’s bride Sally surprisingly turns the tables on the culprit. END_OF_DOCUMENT_TOKEN_TO_BE_REPLACED

Henry Frankenstein is a doctor who is trying to discover a way to make the dead walk. He succeeds and creates a monster that has to deal with living again. END_OF_DOCUMENT_TOKEN_TO_BE_REPLACED 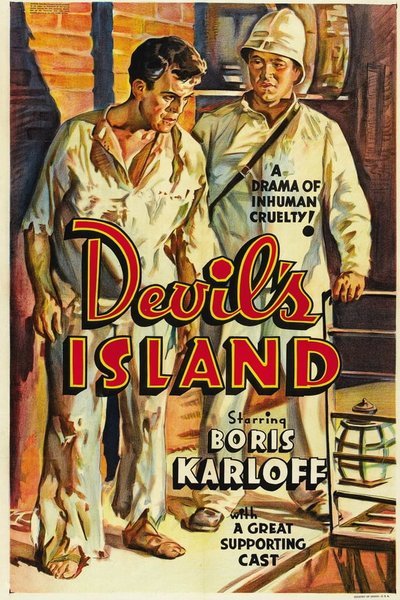 For treating a wounded revolutionary, respected brain surgeon Dr. Gaudet is sentenced to the hellish French penal colony on Devil’s Island. There, he rebels against the inhuman conditions and incurs the wrath of the brutal commander, Colonel Lucien. When Lucien’s daughter is injured in an accident and only Gaudet can save her, the tables are turned. END_OF_DOCUMENT_TOKEN_TO_BE_REPLACED