Steve Thompson (Burt Lancaster) returns home after a few years of knocking around the country following his divorce from good-time girl Anna (Yvonne De Carlo). Getting his old job back driving an armored car, and not even convincing himself that he’s making a new start, he also wants his old wife back. END_OF_DOCUMENT_TOKEN_TO_BE_REPLACED 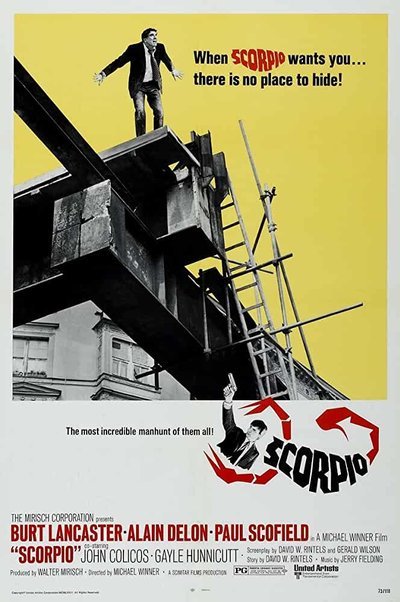 Synopsis:
Cross is an old hand at the CIA, in charge of assassinating high-ranking foreign personalities who are an obstacle to the policies of the USA. He often teams up with Frenchman Jean Laurier, alias “Scorpio”, a gifted free-lance operative. One day, the CIA orders Scorpio to eliminate Cross — and leaves him no choice but to obey. Scorpio is cold-blooded and very systematic; however, as a veteran agent, Cross knows many tricks. He can also rely upon a network of unusual personal contacts, some dating back to the troubled years preceding WWII. A lethal game of hide-and-seek is programmed, but what are the true motives of every single player? END_OF_DOCUMENT_TOKEN_TO_BE_REPLACED

Synopsis:
Report reaches the US cavalry that the Apache leader Ulzana has left his reservation with a band of followers. A compassionate young officer, Lieutenant DeBuin, is given a small company to find him and bring him back; accompanying the troop is McIntosh, an experienced scout, and Ke-Ni-Tay, an Apache guide. Ulzana massacres, rapes and loots across the countryside; and as DeBuin encounters the remains of his victims, he is compelled to learn from McIntosh and to confront his own naiveté and hidden prejudice. END_OF_DOCUMENT_TOKEN_TO_BE_REPLACED

Synopsis:
In the dusty town of Bannock, a stray bullet fired by the gun-toting gang of cattle mogul Vincent Bronson’s drunken ranch hands results in the inadvertent murder of an innocent elderly bystander. As the culprits return to Bronson’s farm in Sabbath, Bannock’s fearless and unyielding law-man, Marshal Jered Maddox, rides into town to bring the killers back to stand trial, even though their powerful employer is willing to compensate for this unfortunate loss. The law is the law, and Maddox is bent on arresting them all. Who can escape the merciless Widow-maker? END_OF_DOCUMENT_TOKEN_TO_BE_REPLACED

Quote:
Dr. Matthew Clark is the head of a state institution for mentally retarded children. Jean Hansen, a former music teacher anxious to give her life some meaning, joins the staff of the hospital. Jean, who tries to shelter the children with her love, suspiciously regards Clark’s stern training methods. She becomes emotionally involved with 12-year-old Reuben Widdicombe, who has been abandoned by his divorced parents. END_OF_DOCUMENT_TOKEN_TO_BE_REPLACED

Synopsis:
Four soldiers of fortune are hired by a wealthy rancher to rescue his beautiful young wife who has been kidnapped by a villainous Mexican bandit. When they finally find her, after fighting their way across deserts and mountains, they discover she is not being held against her will. This causes friction within the band as to whether they should honor their agreement. END_OF_DOCUMENT_TOKEN_TO_BE_REPLACED

Based on Tennessee Williams’ play, The Rose Tattoo is the story of a Southern widow (Anna Magnani) who finally stops pining for her dead husband when she falls in love with a trucker (Burt Lancaster). Williams wrote his play and this adapted screenplay with Magnani in mind, and she earned an Academy Award for her performance. END_OF_DOCUMENT_TOKEN_TO_BE_REPLACED