Lee Hazelwood plays Smoke. An American in Sweden, who works at a local factory and lives in a collective with other hippies and factory workers (among them Christina Lindberg). Together these youngsters go on strike. The owner’s daughter, who Smokes dates, gets murdered (‘smoked’) by one of the factory worker whom later blames Smoke. Smoke gets shot and wounded, and everything is down from there. END_OF_DOCUMENT_TOKEN_TO_BE_REPLACED

Quote:
A voice from IMDB My continuing quest to see every film that Sweden’s stunningly beautiful Christina Lindberg ever made has brought me here to this extremely rare film… The plot: Christina, on arriving in Japan, acquaints a Japanese man at the airport who looks like a sap. He takes her to his apartment where he brutally rapes her and keeps her hostage and bound in chains. Christina’s alluring beauty eventually enchants the rapist and he is soon consulting his ‘How to Stimulate a Woman’ sex book in an effort to please her… Of course, our girl exploits this weakness and manages to escape. She then finds her way to a nightclub and to cut a long story short is ganged-banged by some odd-looking characters. Christina is not having a lot of luck is she, poor girl! END_OF_DOCUMENT_TOKEN_TO_BE_REPLACED 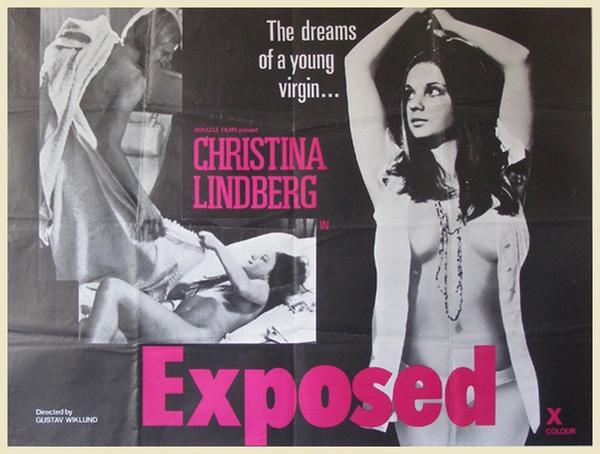 Quote:
With periodic flashbacks and fantasy sequences, Exposed, in terms of its narrative structure at least, is a bit more complicated than your average sexploitation picture. While on the surface Lena is a typical, if flawed, central character the film lets us get into her head enough that even if we don’t completely see her as an innocent, we can at least feel for her. Her plight with Helge and his blackmailing ways is a sticky situation to be sure and while his coercion into the world of kinky sex allows for many titillating sequences, you can’t help but feel sorry for Lena. That said, she uses her sexuality to put herself in rather precarious situations and at times you almost wonder if she subconsciously wants the dysfunction that seems to follow her around. Consider this alongside the way that she’s treated by most of the men in the film, whose eyes linger on her quite voraciously, and you’re left trying to figure out how much of her dire situation she’s put herself in, rather than found herself in. END_OF_DOCUMENT_TOKEN_TO_BE_REPLACED