Quote:
One of the most memorable paranoia thrillers of the 1970s, Sydney Pollack’s Three Days of the Condor never loses its focus as a tense, compelling exercise in suspense. The plot rests on the premise that everyone with power is corrupt; Pollack and writers Lorenzo Semple Jr. and David Rayfiel keep the proceedings from devolving into the preposterous or unconvincing. True to form, Robert Redford represents the powerless, non-corrupt, masses as the film’s bookish CIA researcher Turner. Unlike some of the bleaker examples of the genre (1974’s The Parallax View), Redford’s character ultimately outwits the system and finds a way to fight the corruption, much as he would the following year in All the President’s Men. Redford’s charisma smoothes over some of Condor’s less-believable moments, and Sydney Pollack directs in the distinctively gloomy-but-lively style common to 1970s films. This was the fourth film on which the director and star teamed; they would continue to work together on movies such as 1986’s Out of Africa and 1990’s Havana. –Brendon Hanley END_OF_DOCUMENT_TOKEN_TO_BE_REPLACED

Hal Erickson writes:
Despite an ad campaign wherein RKO Radio congratulated itself for its “guts”, this long-delayed film version of Norman Mailer’s bestselling WW2 novel The Naked and the Dead still had to pull most of its punches (especially when it came to four-letter words). Aldo Ray heads the cast as sadistic sergeant Croft, who’d as soon kill one of his own men as he would the Japanese. Sensitive, moralistic Lieutenant Hearn (Cliff Robertson) tries to put a leash on Croft, but he’s ordered to keep out of the situation by psychotic General Cummings (Raymond Massey), who is convinced that soldiers will fight harder the more they hate their superiors. END_OF_DOCUMENT_TOKEN_TO_BE_REPLACED

A teenager who witnesses the murder of his father vows to exact revenge on the four mobsters involved in the killing.

Peak Fuller nightmare-noir, with a plot that’s jagged and fast like a lightning bolt. The straight world is a million miles away from everything that happens in this movie. END_OF_DOCUMENT_TOKEN_TO_BE_REPLACED 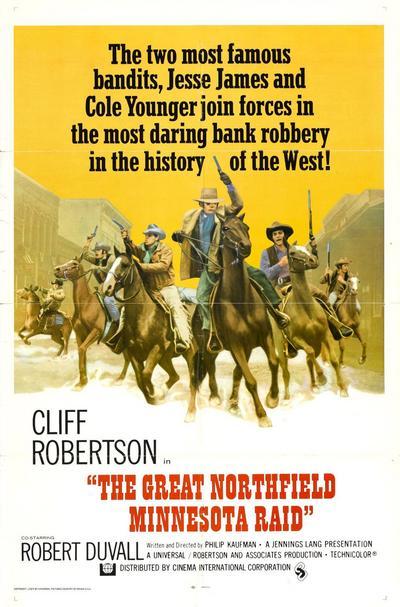 Quote:
In 1876, the Missouri legislature issues a pardon and amnesty to the James and Younger gangs despite many people considering them outlaws. The pardon is because they protected the homesteaders of Clay County against the marauding railroaders, who wouldn’t let anyone or anything get in their way of building the railroad where they wanted. However, the railroad companies and banks still consider them outlaws and will take matters into their own hands if they come across the gangs. Prior to the pardon, Cole Younger had contemplated robbing the First National Bank in Northfield, Minnesota – what is considered the largest bank west of the Mississippi – but has now decided against it. Circumstances, including learning that Jesse James and his gang are going ahead with the robbery behind his back, and that the railroaders issuing a war against them which also includes bribing the legislature to revoke the pardon, make Cole change his mind. But right from the start – even during the planning stages – things don’t go quite according to script, which may be an omen for things to come. Written by Huggo @ IMDB
END_OF_DOCUMENT_TOKEN_TO_BE_REPLACED