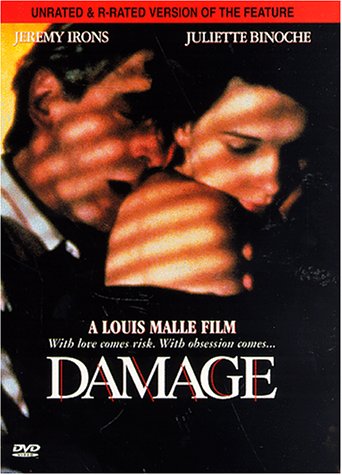 The fascination of watching Damage is similar to the fascination of watching a car crash in progress–you know something unpleasant is going to happen, but your attention is riveted to the scene of destruction. In the case of this acclaimed drama, adapted by playwright David Hare from the novel by Josephine Hart, the destruction results from a collision of sexual attraction between a British governmental official (Jeremy Irons) and his son’s fiancée (Juliette Binoche). Blind to the damage they’ll cause to others and themselves, they begin an obsessive affair based purely on impulsive attraction and the hidden emotions that feed into their immediate physical desires. As you could expect, this leads to emotional fallout for everyone concerned, lending multiple interpretations to the film’s title and allowing Miranda Richardson (as Irons’s wife) to give a brilliant performance drawn from raw anger and betrayal. Under the direction of Louis Malle, this forceful drama never resorts to sordid detail or gratuitous titillation. Rather, Malle and his esteemed cast have explored the ways in which the power of sexuality supercedes the rationality of logic, when mutual attraction is stronger than one’s ability to resist temptation. Damage makes it clear that such an indulgence will always come at considerable cost. The DVD of this fine film includes a behind-the-scenes featurette and the original theatrical trailer. END_OF_DOCUMENT_TOKEN_TO_BE_REPLACED