Quote:
Pride of the Marines is a stirring, powerful, hard-hitting World War II drama. Actually, it’s probably more accurate to say it’s a post-War drama, as the real meat of the picture concerns a wounded soldier’s return to civilian life. While Pride is undeniably patriotic, it also is not afraid to ask some serious, hard questions or to present war as less than a grand adventure. It really features only one battle sequence, which lasts some ten minutes; it’s an amazing, gripping sequence, but it doesn’t glorify battle as many similar films do. The men involved are fighting for their lives, and they react exactly as people really do react in such a situation. Similarly, the discussion about what life will be like when they return home dares to present the possibility that things will not be all roses, a rather bold suggestion for a 1945 film. Finally, the anguish, torment, and bitterness that the lead character experiences is striking and affecting. END_OF_DOCUMENT_TOKEN_TO_BE_REPLACED

Synopsis:
Race, love, and war. The Allies have landed in France, set up in a coastal town, where Lt. Sam Loggins, a serious guy from Manhattan’s west side, falls hard for Monique Blair, an American raised in France. Loggins’ sergeant, Britt Harris, a playboy from Jersey, also finds Monique attractive. She chooses one to love and the other to befriend after disclosing her parents’ history and why she lives in France. The men say it makes no difference, a wedding is announced, and the soldiers face a dangerous mission behind enemy lines. But is everyone being truthful? END_OF_DOCUMENT_TOKEN_TO_BE_REPLACED

When a handful of settlers survive an Apache attack on their wagon train they must put their lives into the hands of Comanche Todd, a white man who has lived with the Comanches most of his life and is wanted for the murder of three men.. END_OF_DOCUMENT_TOKEN_TO_BE_REPLACED

Synopsis:
Found injured by rancher Shep Horgan, Jubal Troop is offered a job as cowhand and soon gains Shep’s trust. Mae Horgan, feeling she’s been trapped into marriage with Shep, takes a shine to Jubal, although he is more interested in Naomi Hoktor who is travelling with a wagon train camped on Shep’s land. Pinky, until now top hand and used to Mae’s favours himself, doesn’t think much of the new deal and trouble is inevitable. END_OF_DOCUMENT_TOKEN_TO_BE_REPLACED

SYNOPSIS:
Clay Spencer is a hard-working man who loves his wife and large family. He is respected by his neighbors and always ready to give them a helping hand. Although not a churchgoer, he even helps a newly arrived local minister regain his flock after he and Clay get into a bit of trouble. If he has one dream in life it’s to build his wife Olivia a beautiful house on a piece of land he inherited on Spencer’s mountain. When his eldest son, Clayboy, graduates at the top of his high school class and has the opportunity to go to college, Clay has only one option left to him. END_OF_DOCUMENT_TOKEN_TO_BE_REPLACED

Quote:
Of the four movies Humphrey Bogart and Lauren Bacall made together, Dark Passage is the forgotten stepchild. Sandwiched between The Big Sleep and Key Largo, Delmer Daves’ innovative and suspenseful mystery-thriller caused barely a ripple at the box office upon its initial release. Maybe the gritty, post-war themes of isolation and paranoia hit too close to home, or the use of a subjective camera alienated audiences. Whatever the reason, Dark Passage got a bum rap from critics and public alike. And while it may not rank up there with the best of Hollywood noir, the film flaunts enough style and substance to merit appreciation. END_OF_DOCUMENT_TOKEN_TO_BE_REPLACED 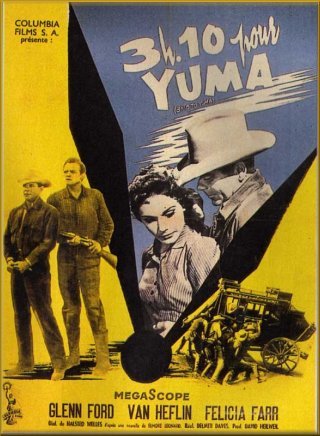 SYNOPSIS:
Dan Evans is a farmer struggling to hold onto his land and livelihood during a severe drought. He finds a financial solution for himself and his family when he is offered a large sum of money to secretly escort Ben Wade, the captured leader of an outlaw gang, to a nearby town and place him on board a train that will carry him to trial in Yuma. The two men hole up in a hotel near the station where the smooth-talking Wade tries to mentally and emotionally manipulate his captor into letting him go. Meanwhile, Wade’s gang is fast approaching the town where a final showdown between Evans and the outlaws is imminent. END_OF_DOCUMENT_TOKEN_TO_BE_REPLACED