Christoph Heider is caught as he abducts the body of his wife from the cemetery chapel. Marianne Heider allegedly died in a bathtub accident, but Heider considers her current partner Wilhelm Jordan guilty and would like to have her autopsied again abroad. END_OF_DOCUMENT_TOKEN_TO_BE_REPLACED

Ekkehard Knörer @ jumpcut.de wrote:
Dominik Graf makes movies for TV that are bigger than TV, but in his case this might be not a problem at all. It seems that his films work best as movies made for TV, TV as movies. This is because of the hackneyed stories he and his writers certainly twist and turn – without the intention, however, of turning them into art. Or rather, it is an art that turns its back to TV. This movement of turning its back remains important, though, as a gesture, a gesture that works best at the place it turns away from: TV. Dominik Graf’s art is an art of transcending TV by means of using it, of reproducing it in a radically transformed way. It remains recognizable in the stories, the motives – not the emotions, though. END_OF_DOCUMENT_TOKEN_TO_BE_REPLACED

Confectioner Mauritz is shot at close range. His wife, Thai woman Sita, whom he met two years ago through a marriage institute, is frightened and barely speaks German. Her five-year-old daughter, who she brought into the marriage, is also silent. The searches lead Commissioners Batic and Leitmayr to the Flügel Agency, that specialises in the placement of women with small children. Batic registers as an alleged customer with the institute. END_OF_DOCUMENT_TOKEN_TO_BE_REPLACED

Bittere Unschuld AKA Bitter Innocence
Andreas Brandt is the head of the research department in a pharmaceutical company. He earns enough to build a future with his wife Monica and his daughter Eva. But a merger puts his position in jeopardy. Brandt randomly observes Larssen, who’s responsible for the merger, raping the waitress Vanessa. Instead of helping her, he takes a file which has previously been stolen by Larssen. It contains incriminating evidence against Larssen. Brandt tries to blackmail Larssen, but Larssen is capable to shift the buck back to Brandt. Slowly Brandt’s family becomes involved… END_OF_DOCUMENT_TOKEN_TO_BE_REPLACED 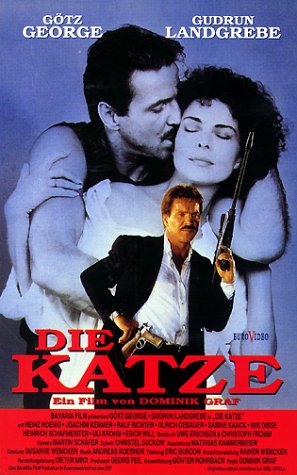 Quote:
One of the highlights of this year’s Edinburgh International Film Festival, it’s already apparent, is a retrospective of the work of Dominik Graf, a genre specialist mostly unknown outside his natve Germany, who has worked in both film and TV, specialising mainly in crime dramas. The program also includes other German crime TV shows selected by Graf to contextualise his work (including Sam Fuller’s Dead Pigeon on Beethoven Street and uber-rare work by Czech emigre Zbynek Brynych, best known otherwise for The Fifth Horseman is Fear). END_OF_DOCUMENT_TOKEN_TO_BE_REPLACED

Quote:
Bank robbery movie from Germany is hailed by some as the best of the genre.

The basic plot is simple, two guys rob a bank, however it quickly turns into something much more complicated as the police show up and the real brains behind the robbery proves to be outside the bank controlling events.

The film begins and I was struck by the sense that this was going to be a piece of Euro-sleaze, however it wasn’t long before the film had grabbed me and pulled me into its web of tension. You’re never really sure where this thing is going or what the ultimate plan or outcome is going to be. Its nice to see a movie that completely surprises you from start to finish. END_OF_DOCUMENT_TOKEN_TO_BE_REPLACED