synopsis
One Night in Lisbon is one of several pre-1942 films which used the screwball-comedy form to comment upon the raging war in Europe. While transporting American warplanes to the beleagured RAF, Texas flyboy Dwight Houston (Fred MacMurray) is caught in a London air raid. Scurrying to a shelter, Dwight meets icy, well-bred Briton Leonora Pettycote (Madeleine Carroll), with whom he falls in love–a feeling that is far from mutual at first. Eventually responding to Dwight’s charms, Leonora agrees to join him for a night’s revelries (as soon as the Nazi bombers head home, that is), but their budding relationship is complicated by the unexpected presence of Dwight’s ex-wife Gerry Houston (Patricia Morrison and Leonora’s erstwhile sweetheart, Cmdr. Peter Walmsley (John Loder). Escaping their respective suitors, Dwight and Leonara end up in neutral Lisbon, only to land in the middle of a Nazi spy ring. END_OF_DOCUMENT_TOKEN_TO_BE_REPLACED

Synopsis by Hal Erickson
Given the usual pedestal upon which mothers were placed by MGM head Louis Mayer, it’s all the more amazing that Mayer gave the go-ahead for Another Language. Louise Closser Hale plays a domineering matriarch who controls the lives of her grown, married sons, using a fabricated heart condition to keep them in line. Helen Hayes marries youngest son Robert Montgomery, only to sit by in mute horror as Mother exerts her authority over her timorous offspring at a weekly family get-together. At the end, only Hayes and Montgomery’s nephew John Beal have the courage to break the apron strings, but not without the formidable opposition of Monster Mom. Based on the Broadway play by Rose Franken, Another Language represented the screen debut of Margaret Hamilton, recreating the supporting role she’d played on stage. END_OF_DOCUMENT_TOKEN_TO_BE_REPLACED 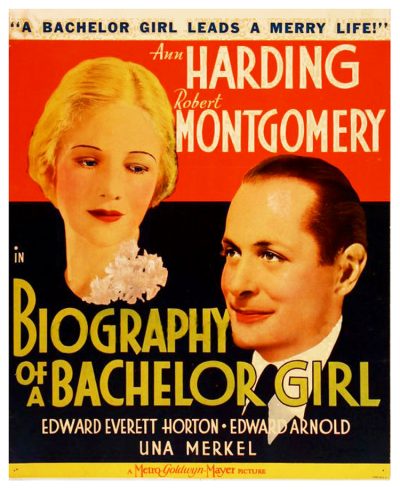 PLOT SUMMARY
from IMDb user reviews
Robert Montgomery is an editor for a magazine and he has convinced the owner to finance a scheme. Montgomery wants to convince a bohemian artist (Ann Harding) to write her supposedly scandalous autobiography to boost the magazine’s sales… END_OF_DOCUMENT_TOKEN_TO_BE_REPLACED