Quote:
A visual social examination in the form of ten conversations between a driving woman and her various pick-ups and hitchhikers.

Jonathan Romney for Screen Daily wrote:
A defiantly no-frills exercise even by his ascetic standards, 10 is Abbas Kiarostami’s triumphant vindication of digital video’s potential to produce a kind of cinema that cannot be achieved by other means. This is screen minimalism at its most uncompromising: 10 sequences of varying length, shot with a locked-off DV camera, of people talking in a car, seemingly improvising around what may be a very loose script. END_OF_DOCUMENT_TOKEN_TO_BE_REPLACED

Quote:
Documentary where Iranian filmmaker Abbas Kiarostami reflects on his own film-making techniques, drawing from his own films – and 2001’s Ten in particular.

An IMDb reviewer wrote:
This isn’t so much a documentary as it is an 80 minute class with Iranian auteur Abbas Kiarstomi. Using his movie “Ten” as an example, he breaks down his theory of filmaking in 10 chapters, ranging from his preference of camera, to his take on character and directing. END_OF_DOCUMENT_TOKEN_TO_BE_REPLACED

Quote:
Dawn of the Capricorn, made by Ahmad Faroughi Kadjar (Qajar) in 1964, is a strange composition that looks at the stagnated situation of a country suspended between the old world and the modern era. Nevertheless, while its aim is clear, the message is vague and up to interpretation. Wherever it casts its eye, Faroughi’s camera tries to register this somehow cynical dichotomy. It begins in a theater house in the old city of Isfahan that has staged Shakespeare’s Othello. There is no attentive audience and the players are detached and exhausted. A young man from amongst the audience begins a long journey into the web of narrow alleys of Isfahan and ends up in the main mosque of the city where he meets a young girl. Despite the initial chaotic situations, from its halfway point, the film begins to render a silent observation of a night that will end at the break of dawn. END_OF_DOCUMENT_TOKEN_TO_BE_REPLACED

Synopsis
Roja is drawn from Neshat’s own recurring dreams, memories and desires. The work traces a young woman’s disquieting attempts to connect with American culture while reconciling her identification with her home country of Iran. END_OF_DOCUMENT_TOKEN_TO_BE_REPLACED

“Neshat spoke to The Stranger’s Jen Graves on Tuesday, by phone from her home in New York.

I first want to talk about Zarin, the anorexic prostitute who hallucinates at the sight of her john, then flees to a women’s bath—a beautiful place, sparkling with dusty light—where she scrubs her own skin until she bleeds. A few years ago, I caught your short video portrait of her, and was never able to get her out of my mind. You’ve said her character feels the closest to you. END_OF_DOCUMENT_TOKEN_TO_BE_REPLACED

Summary
The wife of Nasim, an Afghan immigrant in Iran, is gravely ill. He needs money to pay for her care, but his day labor digging wells does not pay enough. A friend connects Nasim to a two-bit promoter who sells tickets to watch Nasim ride a bicycle continuously for a week. The promoter brings in sick and aged spectators, haranguing them to find hope in Nasim’s strength. Aided by his son, who feeds him as he rides, Nasim grinds out the days and shivering nights. Local officials believe this may be a plot and Nasim may be a spy; they try to sabotage him as do those who bet he won’t finish the week. Will desperation alone get Nasim the money? Is any triumph an illusion? END_OF_DOCUMENT_TOKEN_TO_BE_REPLACED 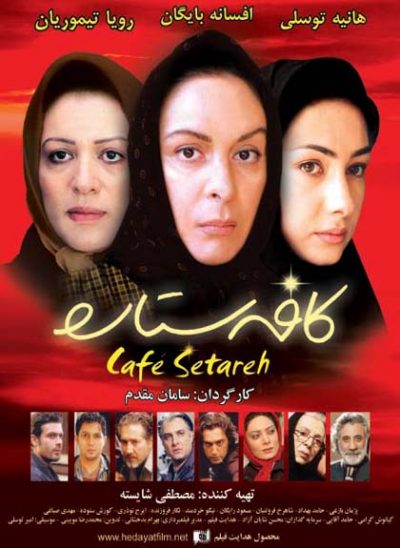 The overlapping tales of three Iranian women who live in a poor Tehran neighborhood unfold by revisiting certain plot points from different perspectives. Each revisit reveals new insights into the characters’ motivations and struggles. The story centers around the people who frequent Cafe Setareh and who play important roles in the lives of each of the main three female characters. END_OF_DOCUMENT_TOKEN_TO_BE_REPLACED