Quote:
In the Swiss mountain village of Trollenberg climbers are mysteriously disappearing on the mountainside. A nearby observatory detects a cloud on the mountainside which gives off radioactive readings and never moves. One of two English sisters who form a psychic stage act receives a premonition of great danger associated with the mountain. As the cloud starts to move down the mountain, killing people along the way, the astronomers realize they are dealing with an invasion of aliens who have come from a dying world and have selected the mountainside’s cold as the environment which most resembles their home planet. END_OF_DOCUMENT_TOKEN_TO_BE_REPLACED

Synopsis:
John Wayne toplines this biography of the cattle owner John Simpson Chisum, a controversial figure who was the most powerful man in New Mexico during the Wild West era. A founder and prominent citizen in the town of Lincoln, Chisum is slow to act when ruthless land baron Lawrence Murphy (Forrest Tucker) moves in on several local businesses and takes them over. By the time Chisum and his ally, fellow rancher Henry Tunstall (Patrick Knowles), decide to go to the law, Murphy’s already bought and paid for influence there, as well. The only recourse left to the cattlemen is to take Murphy on in all-out range war that embroils everyone in the county, including Tunstall’s hand Billy the Kid Bonney (Geoffrey Deuel) and his comrade Pat Garrett (Glenn Corbett). Screenwriter and producer Andrew J. Fenady based the script for Chisum (1970) on his own short story, a very loosely fact-based account of Chisum, Billy the Kid and their involvement in the Lincoln County wars. END_OF_DOCUMENT_TOKEN_TO_BE_REPLACED 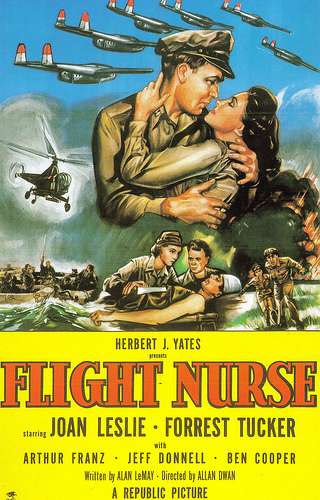 Quote:
A routine film on the surface, Flight Nurse is quite original in showing war from the point of view of a nurse who is as comely as as she is generous. Far from hiding her charms under the uniform, she emphasizes the to assert the right to life and beauty. Dwan thus makes a kind of erotic ritual of her applying make-up, particularly lipstick: Joan Leslie, in sympathy with her wounded patients, knows that her sex appeal provides far more comfort to them thah her medical attentions. In desiring her, they commune with their wives or girlfriends. When it comes to healing, desire is granted the same power as prayer. Michael Henry Wilson, Allan Dwan’s Moral Tales At the Edge of Paradise, in Allan Dwan The Name beneath the Title (2001) END_OF_DOCUMENT_TOKEN_TO_BE_REPLACED