Plot synopsis
Westfront 1918 (aka Comrades of 1918) was the first talkie effort from German filmmaker G. W. Pabst, which he made for Nero Films, a production company headed up by Seymour Nebenzahl. Like the contemporary Hollywood production All Quiet on the Western Front, Pabst’s film is a bitter, melancholy antiwar statement. The story concentrates on four German soldiers, sent to the front in the waning days of World War 1. The futility of killing an enemy who is already dead spiritually, and of being killed for a cause that has for all intents and purposes been resolved, is brought home to the viewer with both barrels. The astonishingly fluid camerawork of Fritz Arno puts the spectator in the thick of the battle, and the effect is both terrifying and heartbreaking To watch only a few moments of Westfront 1918, one might think that Pabst had been making sound pictures all his life, rather than a mere couple of months. – by Hal Erickson. END_OF_DOCUMENT_TOKEN_TO_BE_REPLACED

Synopsis:
An old German mine was split in two after the end of WWI because of where the new border was located. In the French part a fire breaks out; the German miners send a rescue group in, helping their French comrades. Three old German miners, who were not treated friendly at a French inn the night before, start their own private rescue through an old tunnel that separated the two mines. Will the official rescue party realize there are others left behind in time to save them? END_OF_DOCUMENT_TOKEN_TO_BE_REPLACED 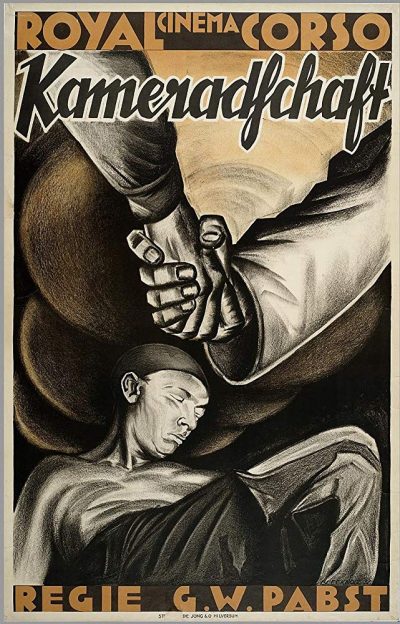