An aristocrat, short of the readies, has turned his desirable mansion into a textile workshop, where he works with his wife, his son and his mother-in-law. He’s grumpy, stingy and unkind. In the village, the wealthy solicitor wants his ugliest daughter to marry his half-witted young son, so she’ll become a countess. But saint Francis Assisi appears and the count changes overnight; he does not want his family to kill the spiders (your sister, the spider) and he begins to ignore the social conventions: his son will marry “La Langouste” (the lobster), the local hooker who keeps a strong clientele among the billeted troops. Now, the aristocrat, imitating our Lord’s apostles, divests himself of all possessions of the material world and intends to hit the road in a horse-drawn caravan. END_OF_DOCUMENT_TOKEN_TO_BE_REPLACED 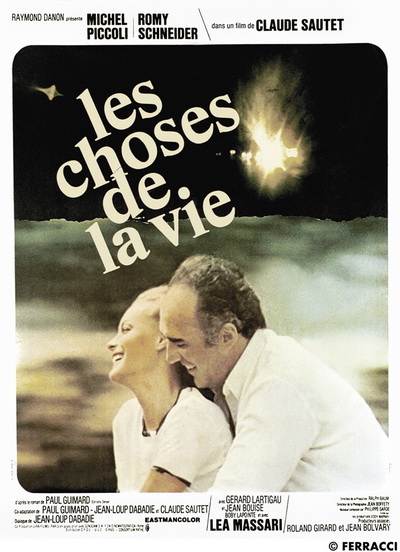 from AMG
After laboring in obscurity for several years, French filmmaker Claude Sautet finally struck a responsive chord with moviegoers in Les Choses de la Vie. The plot isn’t much: the hero, businessman Michel Piccoli, must choose between his wife and his mistress, two women whom he loves with equal fervor. It is what Sautet does with the material that lifts the film above the ordinary. The director puts the central character’s plight in context with his ongoing concerns over his job, his income, and his relationship with his family. In Choses de la Vie Sautet has nothing but the warmest feelings for his characters, which results in more three-dimensionality that might normally be expected in so banal a plotline. END_OF_DOCUMENT_TOKEN_TO_BE_REPLACED