Quote:
A pair of brothers dodge the law while trying to locate their long-lost father in this third feature from independent New York filmmaker Hal Hartley. Robert John Burke stars as Bill McCabe, a failed computer thief who’s just been doublecrossed by his girlfriend and partner. Vowing revenge on the next beautiful blonde he encounters, Bill meets up with his younger brother Dennis (William Sage), a philosophy student concerned about their father William (John A. MacKay). It seems the McCabe paterfamilias was a former major league shortstop who became an anarchist bomber in the 1960s, nearly blowing up the Pentagon. END_OF_DOCUMENT_TOKEN_TO_BE_REPLACED

Flirt is one of Hartley’s more experimental works. It is, essentially, three variations on one short film, each set in different parts of the world (the US, Germany and Japan). Those that know and love Hartley’s work (especially his shorts) will find themselves right at home. It’s smart, funny and ultimately quite touching. END_OF_DOCUMENT_TOKEN_TO_BE_REPLACED

Hal Hartley’s dark comedy “Henry Fool” was an indie masterpiece that effectively and accessibly meshed Hartley’s literary influences with his specific minimalist style and some of the most memorable characters of the last decade. Now, Hartley takes the characters he created for that world and launches them into a surprisingly different direction in “Fay Grim,” a worthy follow-up and rare art house sequel. END_OF_DOCUMENT_TOKEN_TO_BE_REPLACED

NED RIFLE is the third and final chapter of Hal Hartley’s tragicomic epic begun with HENRY FOOL (1997, TIFF) and continued with FAY GRIM (2007). At once a saga concerning the Grim family of Queens and how their lives are turned upside down by the arrival of the self-proclaimed genius Henry Fool, the trilogy is also an illustration of America’s grappling with ideas, art, politics, and religion over the course of 20 years. In this swiftly paced and expansive conclusion, Henry and Fay’s son Ned sets out to find and kill his father for destroying his mother’s life. But his aims are frustrated by the troublesome, sexy and hilarious Susan, whose connection to Henry predates even his arrival in the lives of the Grim family. END_OF_DOCUMENT_TOKEN_TO_BE_REPLACED

Quote:
MEANWHILE concerns Joe Fulton, a man who can do anything from fixing your sink to arranging international financing for a construction project. He produces online advertising and he’s written a big fat novel. He’s also a pretty good drummer. But success eludes him. For Joe can’t keep himself from fixing other people’s problems. His own ambitions are constantly interrupted by his willingness and ability to go out of his way for others. END_OF_DOCUMENT_TOKEN_TO_BE_REPLACED 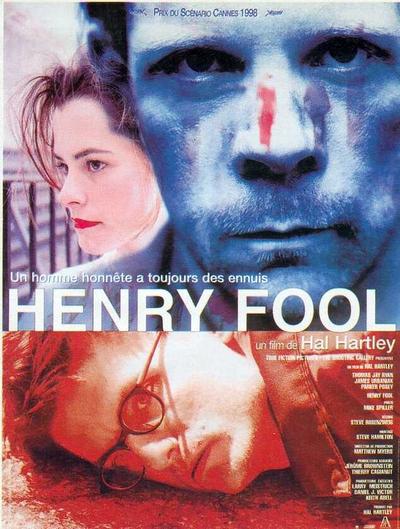 Plot summary:
Socially inept garbage man Simon is befriended by Henry Fool, a witty roguish, but talent-less novelist. Henry opens a magical world of literature to Simon who turns his hand to writing the ‘great American poem’. As Simon begins his controversial ascent to the dizzying heights of Nobel Prize winning poet, Henry sinks to a life of drinking in low-life bars. The two friends fall out and lose touch until Henry’s criminal past catches up with him and he needs Simon’s help to flee the country. END_OF_DOCUMENT_TOKEN_TO_BE_REPLACED