Synopsis:
Based on the true story of a young Scottish lad, Peter Marshall, who dreams of only going to sea but finds out there is a different future for him when he receives a “calling” from God to be a minister. He leaves Scotland and goes to America where after a few small congregations he lands the position of pastor of the Church of the Presidents in Washington, D.C. and eventually he becomes Chaplain of the U.S. Senate. END_OF_DOCUMENT_TOKEN_TO_BE_REPLACED

Quote:
The classic stage hit gets the Hollywood treatment in the story of Elwood P. Dowd who makes friends with a spirit taking the form of a human-sized rabbit named Harvey that only he sees (and a few privileged others on occasion also.) After his sister tries to commit him to a mental institution, a comedy of errors ensues. Elwood and Harvey become the catalysts for a family mending its wounds and for romance blossoming in unexpected places. END_OF_DOCUMENT_TOKEN_TO_BE_REPLACED

In this reworking of Cinderella, orphaned Connie Harding is sent to live with her rich aunt and uncle after graduating from boarding school. She’s hardly received with open arms, especially by her snobby cousin Barbara. When the entire family is invited to a major social ball, Barbara sees to it that Connie is forced to stay home. With the aid of her uncle, who acts as her fairy godfather, Connie makes it to the ball and meets her Prince Charming in Ted Drake, her cousin’s boyfriend END_OF_DOCUMENT_TOKEN_TO_BE_REPLACED

Quote:
Nicole has no job and is several weeks behind with her rent. Her solution to her problem is to try and snare a rich husband. Enlisting the help of her friend Gloria and the maitre’d at a ritzy New York City hotel, the trio plot to have Gloria catch the eye of Bill Duncan, a handsome millionaire staying at the hotel. The plan works and the two quickly become engaged. Nicole’s plan may be thwarted by Bill’s friend, Jim Trevor, who’s met Nicole before and sees through her plot. END_OF_DOCUMENT_TOKEN_TO_BE_REPLACED

In Marseilles, France in 1794, Desiree Clary, a young millinery clerk, becomes infatuated with Napoleon Bonaparte, but winds up wedding Genaral Jean-Baptiste Berandotte, an aid to Napoleon who later joins the forces that bring about the Emperor’s downfall. Josephine Beauharnais, a worldly courtesan marries Napoleon and becomes Empress of France, but is then cast aside by her spouse when she proves unable to produce an heir to the throne. END_OF_DOCUMENT_TOKEN_TO_BE_REPLACED

Synopsis:
Theodore Honey is an aeronautical engineer being sent to Labrador from London to examine the wreckage of a new passenger plane designed by his company. His theory is that the planes are susceptible to metal fatigue after a specific amount of time in the air. The absent minded Honey boards the Reindeer class plane and only realizes that this plane is due to fail in the next few hours after the plane is airborne. He decides to warn the crew and creates an incident regardless of whether he is right or wrong. END_OF_DOCUMENT_TOKEN_TO_BE_REPLACED 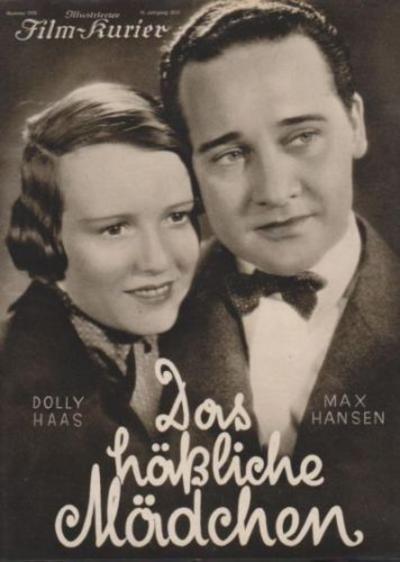 Quote:
“Das hässliche Mädchen” (The ugly girl) of the title is young Lotte (Dolly Haas), who is hired as a secretary by an insurance company precisely for her supposed ugliness, as the director (Otto Wallburg) hopes to avoid amorous affairs in his company this way. But as these things go, not only does one of his employees, Fritz (Max Hansen), fall for her, but unsurprisngly the ugly duckling soon transforms into a lovely lady. Fritz realises a little too late that he’s in love with Lotte, however, and meanwhile establishes an affair with the company director’s girlfriend. And obviously, this leads to all sorts of problems and funny situations… END_OF_DOCUMENT_TOKEN_TO_BE_REPLACED