Synopsis:
Cockney cat burglar Harry Dean needs Hong Kong dancer Nicole Chang’s help to pull off the perfect heist. With a simple makeover and a new wardrobe; Nicole’s resemblance to wealthy recluse Mr. Shahbandar’s late wife is uncanny. While Shahbandar is distracted by the mesmerizing Nicole, Harry takes steps to swipe a priceless artifact from under the tycoon’s nose. But even the most foolproof schemes have a way of backfiring. END_OF_DOCUMENT_TOKEN_TO_BE_REPLACED

Fifth of the Pink Panther series and the last to star Peter Sellers before his untimely death. French mobster, Phillip Douvier has got a problem – hardly none of the other crime families give his family any respect. To try and fix this problem, he gives orders to murder Chief Inspector Clouseau who everybody think is a genius and only a few like Chief Inspector Dreyfus know of his true stupidity. Thanks due to a mixup an escaping criminal dies in Clouseau’s car, and it crashes and explodes. Chief Inspector Dreyfus is delighted (so much so that when at the memorial service he tries very hard not to laugh out in delight and everybody thinks he’s crying), but Clouseau, wondering who’s out to kill him gets the help of his oriental servant Cato and Douvier’s secretary and ex-lover Simone Legree to help solve the mystery… END_OF_DOCUMENT_TOKEN_TO_BE_REPLACED

Synopsis:
Charles Dreyfus (Herbert Lom), the Chief Inspector of the Surete and superior of Inspector Clouseau was last seen in The Return of the Pink Panther (1975) suffering a breakdown cause of Clouseau’s torment. He decides to try and kill him, but fails and was last seen confined to a mental asylum. This movie begins three years later, Dreyfus’ doctors think is well enough to be released, but before he is, Clouseau visits him and agitates him into killing him, so he’s not released. But he escapes and tries to kill Clouseau, but fails. He then decides to recruit some of the best criminals in the world, and then kidnaps a noted English scientist and creates a device that can destroy the world. After using it, his only demand is Clouseau. So every country in the world sends their best assassin to kill him but fail. And Clouseau tries to find Dreyfus before he does any more damage. END_OF_DOCUMENT_TOKEN_TO_BE_REPLACED

Synopsis:
Count Dracula, a gray-haired vampire who regains his youth by dining on the blood of maidens, is pursued in London and Transylvania by Professor Van Helsing, Jonathan Harker and Quincey Morris after he victimizes them and their loved ones. END_OF_DOCUMENT_TOKEN_TO_BE_REPLACED

Synopsis:
Udo Kier is a witch hunter apprentice to Herbert Lom. He believes strongly in his mentor and the ways of the church but loses faith when he catches Lom committing a crime. Kier slowly begins to see for himself that the witch trials are nothing but a scam of the church to rob people of their land, money, and other personal belongings of value and seduce beautiful women. END_OF_DOCUMENT_TOKEN_TO_BE_REPLACED 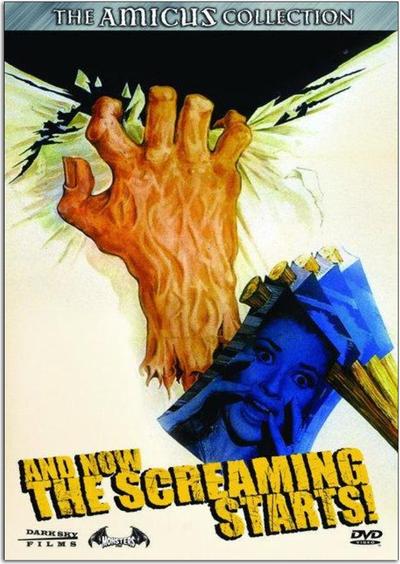 In 1795, in England, the young woman Catherine (Stephanie Beacham) moves to the house of her fiancé Charles Fengriffen (Ian Ogilvy) in the country to get married with him. When she arrives, she feels interest in the portraits of the Fengriffen family, particularly in the one of Charle’s grandfather Henry Fengriffen (Herbert Lom), which seems to have a sort of evil entity possessing it. While admiring Henry’s face, a severed hand attacks Catherine through the picture on the wall. Later, she gets married with Charles, beginning her journey of mystery, eerie apparitions, secrets and deaths, and having her days filled with fear and the nights with horrors in a cursed family.-imdb- END_OF_DOCUMENT_TOKEN_TO_BE_REPLACED

Synopsis by Michael P. Rogers
Before Eddie Constantine became a French pop icon as the slapdash “Lemmy Caution,” he played Johnny, a straightforward London taxi driver. When his new taxi is smashed and he needs a big loan, he agrees to a five-minute marriage to Malou, a naive French girl, so she can become a British citizen. As planned, the two part after the nuptials, not realizing that this has all been rigged as a recruiting scheme by Nick (Herbert Lom), the boss of a Soho prostitution ring. Malou learns of Nick’s plans for her future and tries to escape but is drugged and locked up. With help from the head “girl,” Vicki (Diana Dors), Johnny learns of Malou’s peril, and hatches a plan to free her. This dark action thriller has a few clever twists, and Dors is gorgeous, but her fans may be disappointed at the smallness of her role. END_OF_DOCUMENT_TOKEN_TO_BE_REPLACED