Quote:
Drama of four friends who spend time together in the country when one of them meets a man who claims to be Jesus Christ who wants to share the love secret of the universe with her and so he impregnates her, dies in her bed, and then totally disappears, leaving the friends unsure if it all happened END_OF_DOCUMENT_TOKEN_TO_BE_REPLACED 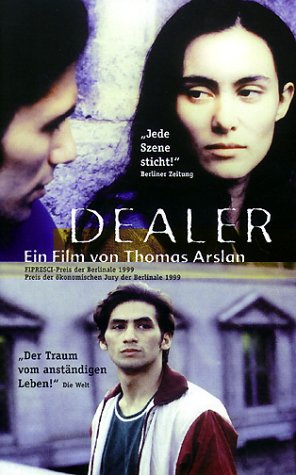 Second feature film by German-Turkish director Thomas Arslan (Ferien, Aus der Ferne), and a rough diamond of the first generation of the so-called ‘Berlin School’. Can is a young and smart upstart; he dreams of a small family but the money that fuels this dream comes from the streets. Can is a dealer, he works for Hakan who is supplying the kids in his neighbourhood with drugs. And while Can struggles to get control over his life he sees his girl friend, the mother of his kid, leaving and himself increasingly surrounded by false friends. On top of it, a cop (Birol Ünel, the male lead from Fatih Akin’s “Gegen die Wand) is on his back trying to persuade Can to work undercover for the police. The more Can attempts to free himself, the deeper he sinks into a life he never aspired to. END_OF_DOCUMENT_TOKEN_TO_BE_REPLACED